I am not trying to best my own record of having spent all 365 days in 2015 in rehearsal, production, or performance. That got to be a little out of hand at times.

Still, I appear to be well on my way to coming darned close to the same record. Fortunately I won’t match the record perfectly because my first audition for 2016 didn’t come until January 3 and I wasn’t immediately offered the part…but I was offered the part less than a week into the year.

I’m opening in The Dining Room with Huguenot Community Players on February 19.

But, it doesn’t stop there.

Three, count ’em three, interesting conversations this week now have me scheduled through late April. That gives me roughly 252 days to not keep the same basic record…well, that maybe adjusted depending on my next audition…

I can’t give details yet but I’ve been offered three additional roles and was informed that the producer was disappointed I wasn’t auditioning for another show. It’s flattering and a bit overwhelming.

Apparently, large, old, white men are indeed in demand in the theatrical world.

Rehearsals for the show I just accepted overlap with The Dining Room but the director is okay with that.

Oh, and the director wants me to dye my hair.

The last time I did that was for Sherlock Holmes: The Final Adventure. I spent three months walking around the office with my boss calling me “Watson.”

I don’t know what he’ll call me this time.

Truth is, my office mates have come to accept the fact that my hairstyles are constantly changing.

Usually there’s the basic “new role?” question and we move on.

As we’ve told our boys growing up our basic concerns over hair have been “clean” and “out of your eyes if you have to run from danger.”

My own personal philosophy has been that I don’t really care what color it is, as long as it’s there. And, that’s a good thing since my natural color these days is “no color”, a.k.a. “almost white.”

Trust me. I’ve earned it.

And, not to worry, I’m still writing. My weekend was spent largely with writing articles and posts, learning lines, and seeing two great shows.

I saw The Fourth Wall at Firehouse Theatre. It was the second time I’d seen this great show. If you didn’t see it, I’m afraid you’re out of  luck. They closed yesterday. But not to worry, it was written by A.R. Gurney who also wrote The Dining Room opening, as noted above, on February 19.

I also saw Unexpected Tenderness by Israel Horvitz at CAT Theatre. That show runs through mid-February.

And, of course, Sunday night was a major TV night with Grease Live, Downton Abbey, and Mercy Street.

Am I too busy? Is this really a question you have to ask?

It’s a new month.  January is gone and I shall not miss it.

These are the choices I made. I don’t mind being this busy. Were it humanly possible, I’d add more things to the agenda. But it’s just not, and that’s probably a good thing.

Your mileage is going to vary. You just need to make sure what’s keeping you busy are the things you really want to be doing.

Like reading and sharing the posts here. And seeing my shows.

I ask so little. 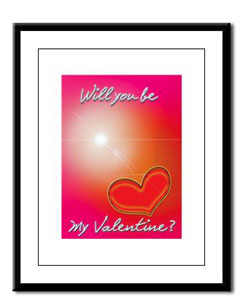 This Valentine print and more available at The Write Side Shop (click the pic).