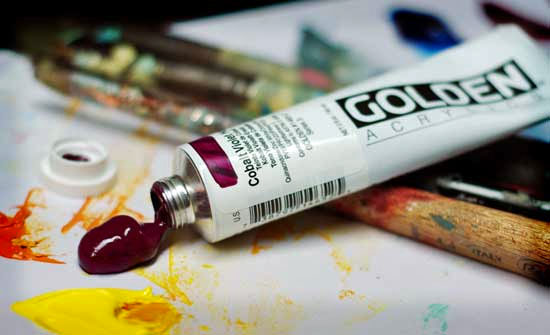 If you hear a voice within you say “you cannot paint,” then by all means paint and that voice will be silenced. – Vincent Van Gogh

I did not intend to make the first three posts of this week a trilogy of my creative endeavors (see the tagline above: Author, Actor, Artist).  But, in retrospect, it’s not such a bad idea.

I’ve had the writing (for the most part) and the acting covered in the past few months/years.

The art?  Not quite so much.

Sure, I do a lot of design work.  Specifically for CAT Theatre (Look!  Crossover art!).  And occasionally I’ll have some other design projects.  The Write Side Shop is doing a steady, if not overwhelming business.  You should go buy crap…er stuff.

I’ve longed to return to the canvas. I’ve just needed the supplies.

But, just like Monday when I talked about the “need” for an iPad, there’s generally a better way to spend the money.

This year, my family heard my pleas and bought me some paints, brushes and canvas for Christmas.

Thus far, I’ve only started reworking the background of a project I started working on before I got married.  That’s right.  Over thirty years ago.  I’m not happy with it yet.  But it’s more better.

I’ve got a plan for the next set of canvases. I’m not sure exactly when I’ll get to them.

This promises to be a busy week of work, rehearsals and, of course, writing.

That means the canvas may sit idle until the weekend.

But if the predicted arctic blast really does hit us, surely there will be some mandatory indoor days and I’ll have time to pick up the brushes again.

Either that or I’ll just make more time.

It’s funny, or maybe a little pathetic, that it took getting to my 50s to really start pursuing my passions.  I sometimes wonder what would have happened if I had done that in my early 20s instead of striving for the best, or at least better, job.

My senior year in high school, I was actually accepted to Virginia Tech as an art major.  As I have written before, I took a different path.

I’ve never let go of the love of drawing, painting and creating art.

Maybe it’s just something I’ll do for me and you’ll never see it here.

But you know I’ll write about it.