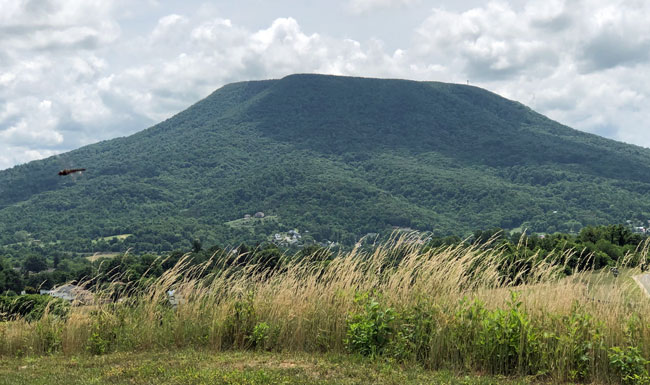 Bear one another’s burdens, and so fulfill the law of Christ.

My wife and I traveled to my hometown in Southwest Virginia this weekend. It was a good trip. The weather was good. The hills and mountains are lush and green. We saw family and friends, and had a good visit with my Mom. We had intended to go this coming weekend for her birthday, but circumstances changed.

The underlying purpose for our hastily rearranged trip was to say goodbye to a dear cousin and friend who left us far too soon.

On the way out of town, we made a quick stop by the cemetery where my father is buried, along with his parents, and most of his siblings and spouses. To be honest, I don’t always stop, but it was 1) Fathers Day and 2) I really wanted a good picture of the mountain.

True story, thanks to tree growth, I can no longer get that picture from the cemetery. I had to drive up to the clinic above the Walmart to get an unobstructed view. When I grew up there, every view was unobstructed.

If i have learned anything by this stage in my life it is that the most valuable things are those significant events such as births and birthdays, weddings, and yes funerals. Not so much the events but the people impacted by them.

Life happens. Live matters. And what matters most is sharing those life moments with the people you love, or 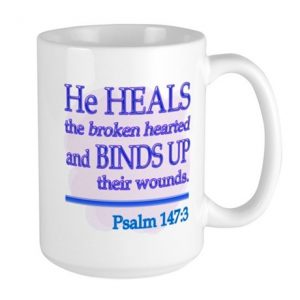 at least can tolerate.

In the early decades of the pandemic lockdown, those of us who are self-proclaimed introverts embraced the challenge of staying home.

But after twenty or thirty years of teleworking in our pajamas, even the most reclusive amongst us longed for human contact.

We longed for conversations that went beyond “Can you hear me?” and “You’re on mute.”

Don’t get me wrong. I can’t imagine being sequestered without the Interwebz.

“You have reached the end of Netflix. Please turn around.”

Come to think of it “please turn around” is also what the doctor said.

I had the first hints of my cancer diagnosis last August when I went for my annual physical.

I have an annual physical because 1) I am old, and 2) my doctor won’t renew the allergy prescription I’ve taken for (literally) thirty years without an exam.

I’ve told some of this before. When I got my PSA numbers following that exam, I called and made the follow up appointment.

At first I was told there were no appointments available until December. But the person on the other end of the phone asked what my numbers were. I told her.

“Oh Lord, Honey. Can you come in Friday?”

The rest, as they say, is history. It’s not far enough in he past, but it will be soon.

This is not the first time I’ve seen this movie.

For the record, I didn’ t like it the last time either.

Having gone through cancer surgery and treatment before, I was convinced that I could handle this.

Then, in early May $#!+ started getting real and I knew that this would be no picnic. Even a picnic with ants.

I mean I never thought it would be, but it was just something I had to get through. And I thought I could do that on my own.

Now don’t get me wrong. My family has been very supportive. My offspring have even discovered that there’s a lawnmower in that strange building out back.

But still there was a need.

I’m not the type to join a support group. Especially these days when they’re all online. I do meetings for a living. I don’t need more.

I’m even trained in counseling methods and I still don’t like support groups.

I was glad that I didn’t actually have to join a group. Knowing that my external radiation treatments start on Wednesday, friends began to call or write.

A good theatre friend and oft production partner said “let me take you to dinner.”

An online friend driving from Iowa to South Carolina took a detour through Richmond to buy me a pint, or two.

Breakfast with another good friend is coming this Saturday. It was supposed to be this past weekend. We rescheduled for reasons I’ve already given.

I’ve told my friends that our visits were not exactly what the doctor ordered, but perhaps it should have been.

The doctor did order five weeks of external radiation. I’m not looking forward to it. But I’ll get by.

With a little help from my friends.

What is Juneteenth, and why should every American want to celebrate it?
Kay C. James in The Washington Times
While some will undoubtedly use Juneteenth to push their “Hate America” agenda and racial division, Juneteenth has always been a day for recognizing America as an exceptional nation — a nation that, though flawed, was built on humanity’s highest ideals and endowed with a constitutional framework that allowed us to right our wrongs throughout our history. Read More.

Opinion: Virginia Democrats show a surprising weakness as the general election campaign kicks off
Norman Leahy in The Washington Post
But that’s also not good. Has McAuliffe not made any ground over all that time? In this early look at the race, he hasn’t. And the numbers reinforce the idea that’s circulated under the radar in Virginia political circles for months: The only one really excited about a McAuliffe return is McAuliffe. Read More.

McAuliffe doubles down on false budget claim that has been fact-checked three times
The Washington Post
There’s a big problem with this claim: It has been fact-checked as false not once but three times by our colleagues at PolitiFact. In 2015 and 2019, PolitiFact dinged McAuliffe for saying he inherited a budget deficit from the Republicans. In 2015, PolitiFact also faulted him for saying it was the biggest budget deficit ever — a statement that his spokesman at the time explained as an inadvertent flub. Read More.

Report: Dr. Fauci participated in ‘secret meeting’ with scientists about COVID-19 origins in Feb. 2020
Blaze Media
Just days after that meeting, one scientist who previously voiced concerns that COVID-19’s genome was unnatural, completely reversed their opinion, and any suggestion that COVID-19 did not naturally emerge was dismissed as a conspiracy theory. Read More.

How to Find Your Writing Voice: 5 Methods from Famous Writers
Nicole Bianchi
Readers who fall in love with your writing voice become your truest fans impatiently awaiting your next article or story. And once you find your unique voice, your writing becomes a truer representation of yourself. Read More.