RECAFFEINATED MONDAYS: What Do I Do Now?

Let’s finish our pints an’ that’ll be enough.  That’ll be a full day for me.

Cait in Bloomsday by Stephen Dietz

Bloomsday was my most recent stage performance in February of 2020, way back before our forty-seven years of fifteen days to slow the spread. It’s also likely to be my last stage performance other than that of portraying the Jolly ol’ Elf.

It’s the choice I’ve made. I could continue to change my appearance, or I could embrace the Santa look year ‘round. I have chosen the latter.

I did not choose the purple streaks in the side of my hair, but I’m working on those.

The jury is out on directing and producing. We’ll see.

I only posted once last week. That may be a new pattern for a while. Instead I went to have my latest CT scan. I start external radiation treatments in a couple of weeks.

In exciting news, I have three new tattoo dots to match the three from cancer treatment 30 years ago. Once again, I didn’t get to pick out a design.

In addition to the CT scan, I had two very long online meetings for work on Thursday and Friday.

Did I mention that they were very long?

So, I didn’t stress over the posts for Tuesday through Friday. And I don’t plan to if that happens again.

I know that I have a small following of loyal friends here. Many just read to check up on how I’m doing. I do appreciate that.

I have dreams that one that I’ll have the “you have to read this” blog. That day is not today.

We may get there. We may not.

Like Cait, some days are more full than others.

Saturday, for example, I did a long-needed clothes purge. Most of what I got rid of still fit, but I couldn’t recall the last time I wore it.

I joked on Facebook that I had enough t-shirts that could potentially have gone through all forty-seven weeks of 15 days to slow the spread without having to do laundry.

I don’t buy novelty t-shirts anymore. I didn’t even buy a beach t-shirt last year. But, I seem to collect them from shows and events. I kept far more than I will ever wear.

While I could probably stand to do another round of purging, at least I can see what I have now.

Not to mention that I made room for more red things. If you know what I mean.

This summer, this pandemic, this cancer are all sort of an adventure.

Some adventures are more equal than others.

You might have thought that as we were coming out of this that I would have a better handle on the writing and where I’m going with things.

It’s okay that I didn’t use the last fifteen months to get all my ducks in a row. I suspect that you didn’t either.

No, my plan is to survive these adventures. And then maybe write about them.

A few more this week since it’s been a while.

World’s Economy Saved As Giant Crack In Earth Swallows Up All G7 Conference Attendees
The Babylon Bee
Witnesses reported feeling a low rumble beneath their feet as Joe Biden, Justin Trudeau, Angela Merkel, and others gathered on the green grass for a photo op. The rumble grew to a roar as the ground below them opened up and dragged every G7 leader into the depths of the earth. The ground then closed up over them and they were never heard from again. Read More. 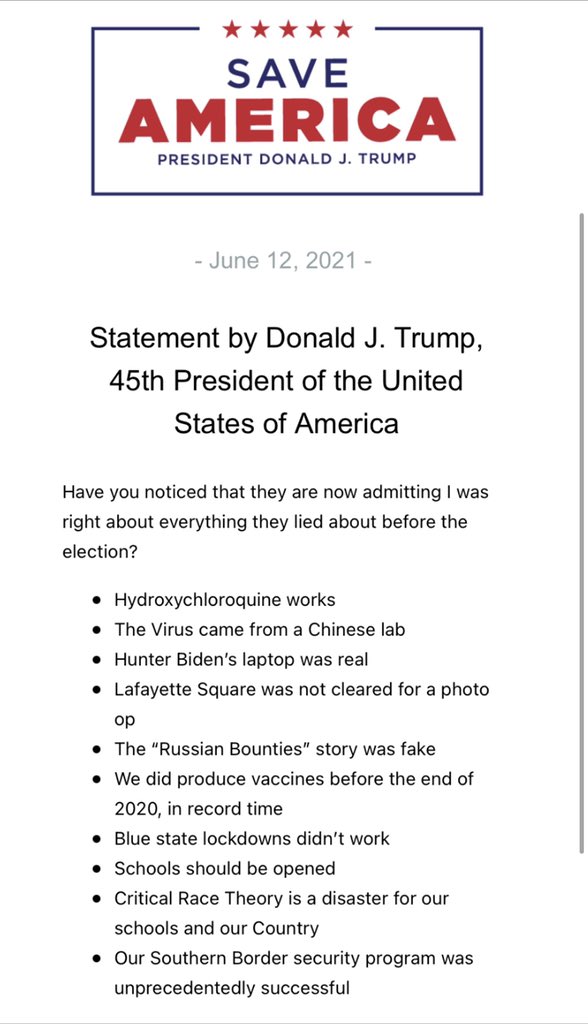 ABC News
U.S. Park Police did not clear Lafayette Park and the nearby area of protesters on June 1, 2020, so President Donald Trump could walk from the White House over to St. John’s Church, but learned of his interest in surveying the site hours after they already had begun planning to clear the area to put up new fencing, according to a new watchdog report. Read More.

It’s almost like we would have had a different outcome if the news had been reported correctly.

Facebook and More Media Trump Lies
The American Spectator
Listening to Facebook executive Nick Clegg explain Facebook’s decision to ban former President Donald Trump for two more years is like watching a real-life Pinocchio who is so used to not telling the truth that the size of his growing nose goes completely unnoticed. Read More.

Burger King mocks Chick-fil-A in tweet announcing pro-LGBTQ campaign for Pride Month — and the backlash is brutal
Blaze Media
By the end of June, Chick-fil-A just might be thanking Burger King for mocking the chicken sandwich giant. Read More.

That’s…Problematic: Hunter Biden Drops N-Word, Talks About His Penis in Unearthed Texts
TownHall
Hunter repeatedly used the n-word in conversations with his white lawyer, sending messages such as “Becaause n***a you better not be charging me Hennessy rates.” Read More.

Ex-Gov. Terry McAuliffe Kicks Off Campaign by Repeating False Claim He ‘Inherited the Largest Deficit’
Breitbart
The Virginia Democrat, who served as governor from 2014 to 2018, made the same claim multiple times during his tenure, driving PolitiFact to fact-check him on three different occasions and rate the claim “mostly false,” “false,” and “false,” respectively. Read More.