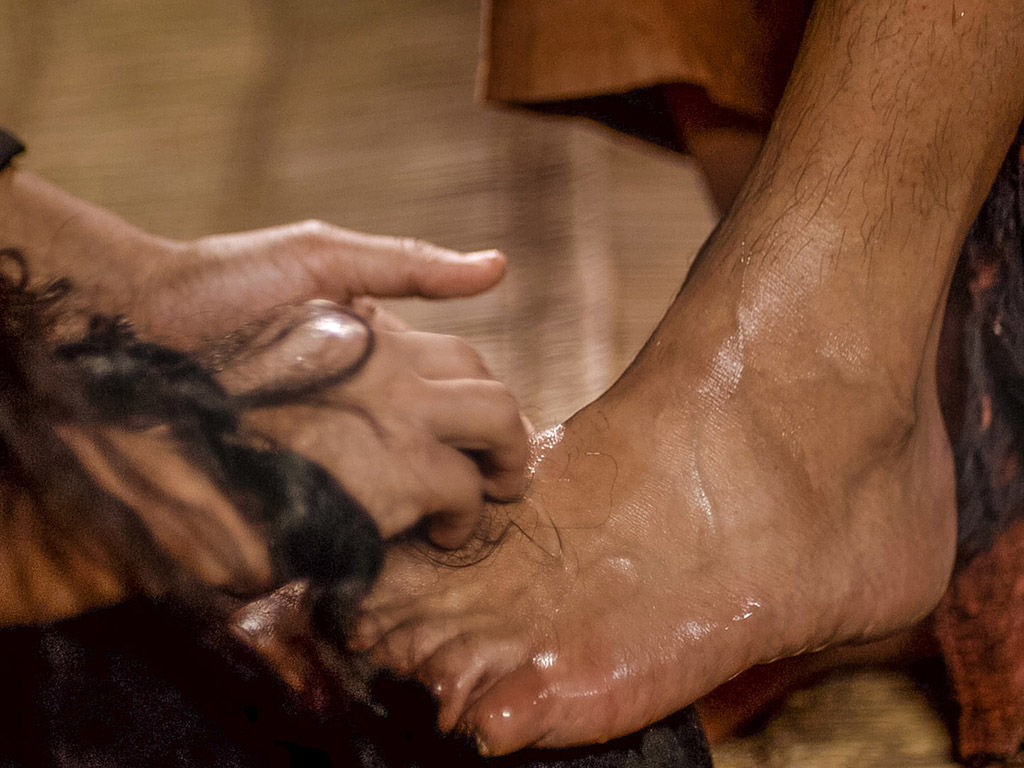 While Jesus was in Bethany in the home of Simon the Leper, a woman came to him with an alabaster jar of very expensive perfume, which she poured on his head as he was reclining at the table.

When the disciples saw this, they were indignant. “Why this waste?” they asked. “This perfume could have been sold at a high price and the money given to the poor.”

1Aware of this, Jesus said to them, “Why are you bothering this woman? She has done a beautiful thing to me. The poor you will always have with you, but you will not always have me. When she poured this perfume on my body, she did it to prepare me for burial. Truly I tell you, wherever this gospel is preached throughout the world, what she has done will also be told, in memory of her.”

It is now Wednesday of Holy Week.

Judas is making his deal with the religious leaders. While Jesus stays with friends in Bethany, a woman anoints his feet with a very expensive perfume and her tears.

On a side note, while I don’t want to dig too deeply into the history of the church, it is still significant to note that a woman was first to be told of Jesus’ birth…women, and one disciple were with him at the cross…women were the first to arrive at the empty tomb.

There’s a sermon, or a book, or a series in there. And they’ve probably been written by better scholars than I.

Our traditional tellings of the Passion don’t always do justice to the women involved. All of the Marys seem to be combined into the one Mary Magdalene. It’s just not that clear.

But again, for the purposes of this post, we’re not going there.

As I was doing some research for this post, I came across, or maybe I searched for some videos from Jesus Christ Superstar. One is provided below.

This musical played a dual role in my development during my middle school years. I first heard it when someone brought the record to our music class.

I’d seen movie musicals, but I don’t think by that point that I’d seen a live musical production.

Actually I’m certain of that because the first live musical I saw was Cabaret, and that’s not really what I want to talk about during Holy Week. But I did have a crush on Sally Bowles.

I was thirteen, Karen, get over it.

So, the musical arrived at at time when I was solidifying my faith and what I believe, and at a time when I began to be fascinated with the stage.

JCS was not without controversy. It was considered blasphemous. It didn’t tell the story of the resurrection. It made too much of the relationship between Jesus and Mary.

It also moved me. Deeply.

So much so that when as the president of the youth group when I was tasked with developing the Sunday evening Easter service, I pulled a recording from Superstar. While most of the evening was a mix of scripture when it came time for the flogging and the crucifixion, I played those portions of Superstar.

Let’s just say there were cards and letters.

I’ve only seen JCS once on stage once, years ago my wife bought me tickets to see it at Wolf Trap with Ted Neely and Irene Cara.

I was thrilled a couple of years ago when the arena version was produced live on television, and pre-pandemic had hopes of it coming to an arena near me.

Or near you if you want the blessing of giving me tickets.

So, the question remains this week is which version will I watch? While I’m not a fan of the 70s movie version, because it is very 70s, I’ll watch one or two of the stage versions.

For many years I wanted to be in a stage version. I’ve aged out of that, but now my goal is to direct a production. I have a dream, so to speak.

That may never happen. I just hope that we can get back to any version of the theater soon.

That’s not this week. This week we’re on a journey.

Even though it’s a difficult and painful journey, we have the blessing of knowing the outcome.

But so is Sunday.

The Biden Administration Flip-Flops Again, and the Incoherence Is Breathtaking
RedState