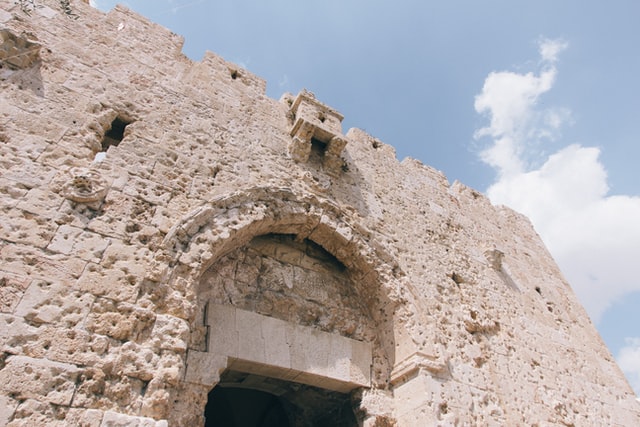 Jesus entered the temple courts, and, while he was teaching, the chief priests and the elders of the people came to him. “By what authority are you doing these things?” they asked. “And who gave you this authority?”

Jesus replied, “I will also ask you one question. If you answer me, I will tell you by what authority I am doing these things. John’s baptism—where did it come from? Was it from heaven, or of human origin?”

They discussed it among themselves and said, “If we say, ‘From heaven,’ he will ask, ‘Then why didn’t you believe him?’ But if we say, ‘Of human origin’—we are afraid of the people, for they all hold that John was a prophet.”

So they answered Jesus, “We don’t know.”

Then he said, “Neither will I tell you by what authority I am doing these things.

It is Tuesday of Holy Week and Jesus continues his way to the cross. The religious leaders are getting more annoyed, more frightened. The plot to destroy Jesus is taking shape.

Jesus knows this, and he keeps going.

This morning I struggle a bit with the keeping going part…with the writing at least.

At the beginning of the month, I made a new pledge to concentrate a little more on the writing. I promised myself to post every weekday. I started Short Story Friday. And I’ve got at least one script in development.

And yet, some days I struggle with what to write here.

Oh, don’t get me wrong. You can just look at the links at the bottom of these posts to realize what is garnering my attention.

I chose not to write about them, allowing the articles to speak for themselves.

But you should read them.

There’s a lot of hysteria out there.

Don’t even start pointing fingers, Karen, because it’s on all sides.

So, I try to write here to to inspire, to make things a little brighter, to relieve some of the tension we’re all feeling.

I know, dear readers, both of you, are thinking “that’s what he’s trying to do?”

It is. To an extent.

When I was a social worker, we had a client who liked to say “the more you stir it, the more it stinks.”

I used to stir things up on the Internet. In the early days of the CompuServe squeal I had to learn how to argue. I got it wrong a lot of times.

Then I wrote for a while for political sites, and edited a political magazine.

Still, one does not simply walk into Mordor or away from a career that has basically been forth some years of political campaigns and public policy work.

The struggle, as they say, is real.

So when I scroll through Facebook and see the memes that have a sliver of truth, but are just slightly skewed to prove a political point I am so tempted to write “yes, but…”

Yes, but I don’t. It won’t help anything. It won’t change any minds.

Trust me. This is the voice of experience.

But it does mean that there is wisdom in not fighting those battles on the Internet.

It’s Tuesday of Holy Week. Things are getting more tense for Jesus as he approaches the cross. Little battles along the way, in the temple, with the fig tree, with the religious leaders.

Jesus knows the big battle is just ahead, but he keeps his cool.

Go thou, and do likewise.

Photo by Robert Bye on Unsplash

PIERS MORGAN: I’m not a racist and neither is Sharon Osbourne but that didn’t stop the woke mob lynching her just for defending me in a shocking episode that shames the Cowardly Broadcasting System and should horrify anyone who values free speech
Daily Mail

Woman posts photos of her ‘Christian Seder,’ is met with backlash from Jewish community
TODAY