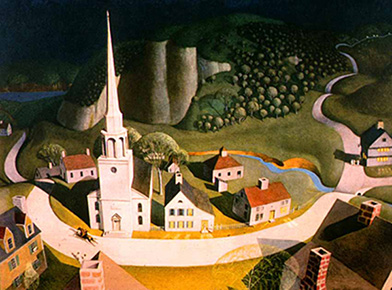 On this day in 1775, Paul Revere and other riders warn the countryside of the advancement of British troops from the sea. The Midnight Ride of Paul Revere by American artist Grant Wood. (1931)

The other day on Facebook, after a couple of gloriously warm weather days, I asked if it was safe to move my houseplants outside.

It appeared that Spring had indeed arrived. But not to let us off the hook, Sunday night we had severe storms and tornado warnings.

I don’t know if it was the click of the power going off, or the teenager calling for the cat to come in out of the rain. But I woke up, took care of a little plumbing business, and went downstairs to sit in the dark with the family for a bit. Finally the cat did show up at the front door. Wet and scared.

The dog, by the way, was already upstairs under one of the beds.

Let’s just say our livestock doesn’t really handle the storms all that well.

In spite of going to bed later on Sunday night because rehearsals for Doublewide, Texas have begun and, in spite of waking up in the midst of the storm, I managed to not talk myself out of going to the gym on Monday morning.

The end result was that I was very, very sleepy at work on Monday afternoon. And I knew I had another night of rehearsals ahead.

In fact, I have many nights of rehearsals ahead. We’re in full swing for Doublewide, Texas to open on June 1. You won’t want to miss it. Because, if I do say so myself, this cast is going to kick ass.

‘Scuse my French, or Texan as the case may be, but it’s true.

The director’s not so bad either.

Here at mid week I’m juggling things at the day job…there’s a mini-road trip tomorrow, and sorting out what’s happening in the theatrical seasons ahead. Announcements are being made, opportunities are arising.

You know I can’t talk about any of this yet, because you know if I could I would have already done so.

Let’s just say that my dance card is starting to fill up.

I had a mini-conversation with a theater friend the other day. We both discussed how we’ve got so much going as well as the fact that it’s hard to say no.

Don’t get me wrong. I actually have said not to several projects. Okay, maybe not several, but a few.

At the same time, there are more out there that interest me.

Oh, Publisher’s Clearing House, why must you taunt me so?

Look, this is a continuing theme. If I’m really going to Get Things Done in 2018, I’m going to have to make more choices.

That being said, first let me thank you for choosing to read this blog. I’ve modified my posting schedule. I’d probably modify it a bit more but all of the “experts” tell me that I must post on a regular basis to keep my readership. So, that’s why I do. That’s also why some of my posts are incoherent ramblings.

I need to get to work on more short stories as well. After this coming Friday I have, at best, just one more that I might be willing to post. So, that means I need to write more.

For example, I have about five “finished” novels. But they’re not ready for anyone to read. They’re barely ready for me to read.

That means, when I’m accepting or considering a new project, I have to remember the novels.

Not unlike remembering the Alamo, but with a happier ending.