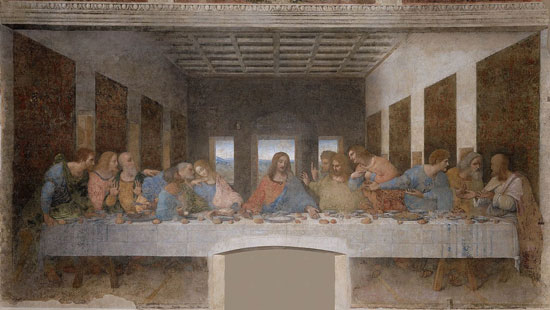 “If you want to be in the picture, sit on this side of the table.”
The Last Supper by Leonardo da Vinci

The God who gave us life, gave us liberty at the same time.

American lawyer, politician, 3rd President of the United States, and Virginian, Thomas Jefferson, was born on this day in 1743 (died 1826).

Centuries earlier on a similar Thursday evening Jesus was partaking of the Passover meal with his disciples. His words and actions were strange to them as he washed their feet and spoke of his body and blood.

Judas fidgeted as he waited for the right time to leave.

Jesus went into the garden to pray, the disciples with him fell asleep while they waited.

My prayer is not for them alone. I pray also for those who will believe in me through their message, that all of them may be one, Father, just as you are in me and I am in you. May they also be in us so that the world may believe that you have sent me. I have given them the glory that you gave me, that they may be one as we are one— I in them and you in me—so that they may be brought to complete unity. Then the world will know that you sent me and have loved them even as you have loved me.

Then the guards arrived to take him away.

Judas betrayed him with a kiss.

Jesus was taken to Pilate, then to Herod, and then back to Pilate who pronounced the sentence before symbolically washing his hands. Jesus was beaten, abused, and mocked.

He was human, but he was also God. He could have stopped this at any time.

The plan was in place. The plan for our redemption.

For God so loved the world that he gave his one and only Son, that whoever believes in him shall not perish but have eternal life.

Tomorrow would be the darkest day.