On this day in 1876 Alexander Graham Bell made the first sound transmission to his assistant, Thomas Watson.

You have to wonder if Bell and Watson would have been so eager to transmit sound if they had known it would lead to cell phones.

Well, really you don’t have to wonder, but it makes a good lead for my blog post.

But here, 140 years later, the world is certainly different. We are in constant contact.

Well, mostly, I’m in contact with my family when they have their phones on.

Sometimes I wonder if the whole instant information thing is worth it. These days, if you don’t know the answer to 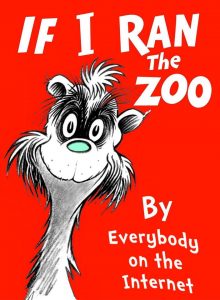 something you can run to your favorite search engine and find an answer.

Sometimes you can even find a correct answer.

All I know is that, on more than one occasion in the middle of the night, WebMD has assured me I’d be dead by sunrise.

In the age of instant information, we all become instant experts.

Take for example the shooting of Harambe the Gorilla. It’s a tough choice, but in my limited knowledge, I’m thinking the zoo officials did the only thing they could do.

Yes, it’s sad that the Gorilla, theoretically in captivity to keep him from…being shot…was…shot.

And it’s a shame that the little boy 1) got away from Mom who said “no you’re not going in there” and 2) was able to get through the enclosure.

Thanks to technology (thank you very much Alexander), the Internet became overnight animal and childcare experts.

This, my friends, is entirely different than Cecil the Lion who was hunted for sport and just happened to look at lot like the other lions who weren’t as famous.

We spend our time at the keyboard pontificating, sharing our opinion, telling others we know better.

Look, I’m as guilty as anyone because you know: this blog.

I spent my early years on the web “screaming” because it was like “Hey look! Platform!” and of course I was going to change everyone’s mind.

President’s McCain and Romney both sent me personal notes of thanks. Governor Cuccinelli just bought me a watch.

These days on the web I do my best to refrain from expressing opinions…except about the fact that I’m not voting for Trump or Clinton…rather instead I’ll just post an article and ask folks to read. It’s not that I’m ashamed of my opinions, it’s just that I don’t want to waste the energy arguing about them.

It’s too bad we all can’t learn that lesson.

This week it’s Harambe. Next week it will be something else. There will be millions of experts and millions of opinions on Facebook and elsewhere.

And no one will be reading any other than their own.