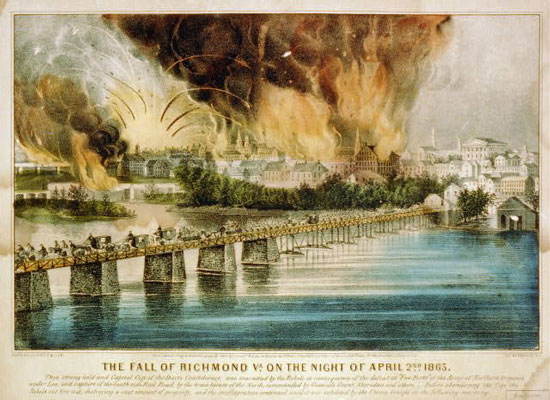 U.S. Representative and Senator from Mississippi, the 23rd U.S. Secretary of War, and the President of the Confederate States of America Jefferson Davis was born on this day in 1808. (died 1889)

On the June 2, 1865, known as Evacuation Sunday, and the eve of his 58th birthday, Davis, his Cabinet, and the last remaining Confederate defenders evacuated the City of Richmond and fled along the last remaining open railroad line. As they left they set fire to bridges, the armory and warehouses.

The Union Army put out the fires saving, among other things, the State Capitol, and St. Paul’s Episcopal Church where Davis had been attending on that Sunday morning when he received a message from General Robert E. Lee that he must abandon the City.

This is history. This is not about rejudging or re-fighting the war. It’s history that needs to be told.

Whether or not Jefferson Davis really needs a highway named for him, or even a statue on Monument Avenue is a discussion for another day. I will say that, with regard to the statue that I’m just not about tearing down art because the history is painful.

I turn 58 myself this year. I am not anticipating that I will have to abandon the City.

At least that’s not in the plans.

Plans for the next month or two pretty much involve just working every day.

I could commemorate the evacuation of the City by the Riding of the Rebel Yell at Kings Dominion, but don’t anticipate reading about that here.

Because it’s not going to happen. I ain’t just whistlin’ Dixie.

I don’t do roller coasters. And I don’t revise history. No wait, some of my writing does lean toward the historical fiction side.

But, it’s based on fact even if it’s make believe.

It’s the weekend, and mine is full. There’s yard work, and work work, and church work, and writing work.

I’m not complaining. It’s what I do.

I would also not complain if you wanted to bless me with some yard work.

At which time you may whistle Dixie or any other regional song you wish whilst you separate the liriope and and the lilies.

The opportunity is yours.

Canadian-American actress Colleen Dewhurst was born on this day in 1924 (died 1991).

Years ago (26 in fact) the wife and I had the chance to see Ms. Dewhurst and E.G. Marshall in A.R. Gurney’s Love Letters at the National Theater in Washington, DC.

Earlier this year I saw Gurney’s The Fourth Wall at Firehouse Theatre, and was in Gurney’s The Dining Room with Huguenot Community Players. Huguenot will present Gurney’s Sylvia this fall.

As far as I know there’s no city burning or railroad fleeing involved.