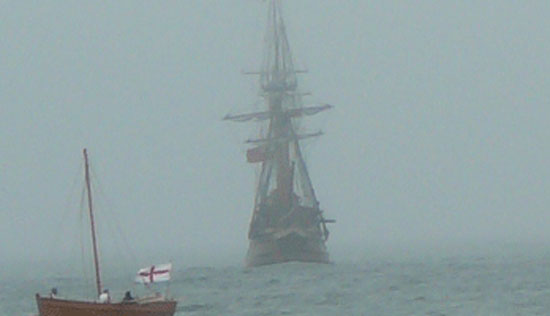 On this day in 1607, English colonists made landfall at Cape Henry, Virginia. The crew didn’t actually come ashore until April 29, but when the did, the Reverend Robert Hunt offered this prayer:

We do hereby dedicate this Land, and ourselves, to reach the People within these shores with the Gospel of Jesus Christ, and to raise up Godly generations after us, and with these generations take the Kingdom of God to all the earth. May this Covenant of Dedication remain to all generations, as long as this earth remains, and may this Land, along with England, be Evangelist to the World. May all who see this Cross, remember what we have done here, and may those who come here to inhabit join us in this Covenant and in this most noble work that the Holy Scriptures may be fulfilled.

Hunt declared “from these very shores the Gospel shall go forth not only to this New World but the entire world.”

The following Bible passage was read at the conclusion of the prayer:

All the ends of the earth
will remember and turn to the Lord,
and all the families of the nations
will bow down before him,
for dominion belongs to the Lord
and he rules over the nations.

That’s the way it happened folks. Good, bad, and ugly, the first Europeans who arrived here were people of faith. Were some of their actions misguided? Absolutely.

But the journey they embarked upon brought us to where we are today as a nation.

Now, let’s not get carried away. We’re currently a nation hellbent on electing either Donald Trump or Hillary Clinton and we’re arguing over where people get to pee.

This is not about that.

We are a nation that had great beginnings. Sure, it took us a long time to get things right, like ending slavery, giving women the right to vote, and more. But we’ve been the world’s defender, and the world’s most free nation.

I’m not advocating a theocracy. Just an acknowledgement that for well over 400 years, and more than 200 years as a nation, America has turned to God.

God has blessed this country abundantly. We need to remember that and not take it for granted.

Or perhaps just remember to pray.

Also on this day in 1933 American actress, singer, and producer, Carol Burnett was born.