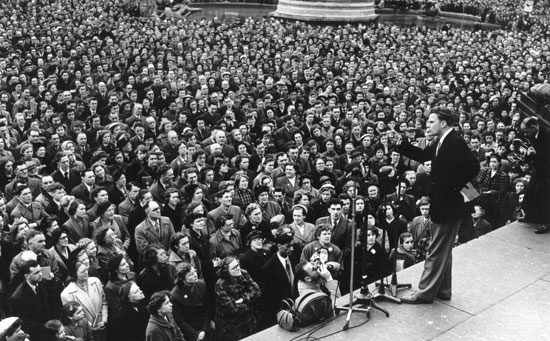 “My home is in Heaven. I’m just traveling through this world.”

Evangelist Billy Graham was born on this day in 1918. As age takes its toll, and with the loss of his beloved Ruth, Graham has rarely been seen in the public eye in the past few years. His son Franklin, carrying on a ministry of his own, frequently notes that his father realizes the days of his early journey are nearly over.

Graham preached literally for decades and delivered the message of the Gospel of Jesus Christ to millions of people around the world. He served as an advisor to several American Presidents, and as such his life was not without controversy. Of course, neither was the life of Christ.

But one can hardly imagine a person living today who would be more likely to hear those words “Well done, good and faithful servant” than Billy Graham.

Graham has lived his life well, and he will finish well.

It’s easy to look at a life like Graham’s and think “wow, I haven’t done much.”

My wife once lamented, after hearing of a certain young person’s accident that “I need to do something significant, I’m too old to die young.” That was nearly 20 years ago.

But we all don’t have callings like Graham. We’re not all called to be evangelists.

For the perfecting of the saints, for the work of the ministry, for the edifying of the body of Christ:

I’m not going to leave a legacy like Billy Graham. I was never called to. Even if I had started forty years ago, I wouldn’t have the same impact.

I hope instead to have an impact on the lives and community around me. I’m not a preacher. I don’t distribute tracts. I don’t blog exclusively about faith issues.

The way I see it, I’m just called to live my life the best I can, and to do what I can to make this world a better place.

If I’m doing it right, people will see Christ in that.

Trust me. I know I don’t always hit the mark.

But the important thing is that I try, and that when I inevitably screw up, I start over again.

That’s why I’m thankful for grace.

Graham put it this way.

“I’ve read the last page of the Bible, it’s all going to turn out all right.”