Random thoughts on a Monday morning 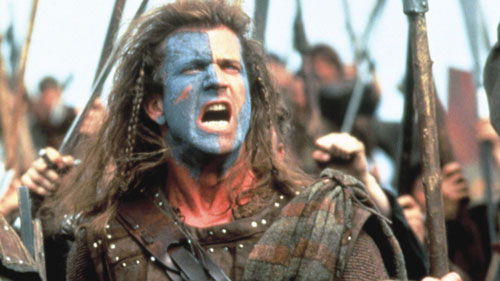 On this date in 1305 – William Wallace, Scottish patriot, was executed for high treason by Edward I of England.

My Son, Freedom is best, I tell thee true, of all things to be won. Then never live within the Bond of Slavery.
As quoted in William Wallace, Guardian of Scotland (1948) by Sir James Fergusson, p. 4

For our family, this past week was all about getting back into the routine. Vacation is sadly over. The oldest is back in school for his final year. The wife is back to full-time work (her contract runs for 10 months). And while the 14-year-old still spends most of his day playing video games, he’s “graduated” from the middle school youth group to high school. And mom and dad are daily purchasing more home school curriculum. (If you’re a legislator, a voucher or two right now would be very nice).

The news of the world remains…horrible.

The mess, and there’s no other way to describe it, in Ferguson continues. As I’ve said before, I haven’t followed it as much as I should, so I really can’t comment on what happened. Because I don’t know what happened. And the vast majority of people commenting and screaming and donating and protesting don’t either. We know a young black man was shot by a white police officer. Those are the only facts most of the world has. But the hysteria and accusations on both sides have escalated so that we may never have a true resolution and true justice.

Also circulating around the net were the news stories of the savage beheading of jouralist James Wright Foley. I linked to a story on Facebook, I won’t here. Sadly, the video was also circulating around the Internet. There’s a fine line between needing to know the news and obsessing over actually seeing the horror. But what we can’t do is ignore it. ISIS just doesn’t want us out of the Middle East. They want us off the planet. There is no negotiating with them.

And we can’t just turn off the news. There is a very real possibility that they’re already here.

Army veteran, former CIA operations officer and advisor to the House Homeland Security Committee told Fox and Friends (oh, get over it) that it is very possible that ISIS has already crossed the southern border of the United States. [via Breitbart]

What you do with that information is your choice. But don’t ignore it.

According to the U.S. Government Accountability Office, the Pentagon broke federal law when it exchanged five Taliban detainess for Army Sgt. Bowe Bergdahl without giving sufficent notice to Congress. Susan Poling, general counsel noted that the Defense Department borke the law by using “appropriated funds to carry out the transfer when no money was available for that purpose.” Poling noted that the agency wasn’t addressing the actual exchange, but the responsibility for proper notification. [WTVR]

Oh, Hail yes, to the Redskins…

Unless you’re the editorial board of The Washington Post which has announced they will no longer refer to the team as Redskins.

If the editorial board is really so concerned about proper language usage, they would stop referring to the Post as a newspaper.

It’s bigger on the inside…

Geeks around the world, yours truly included, are rejoicing that tonight Peter Capaldi arrives as the twelfth doctor as Doctor Who returns to BBC.

You dance love, and you dance joy, and you dance dreams. And I know if I can make you smile by jumping over a couple of couches or running through a rainstorm, then I’ll be very glad to be a song and dance man.
– Dancer, Actor, Singer, Director and Choreographer Gene Kelly, Born on this Day in 1912 (died February 2, 1996)

I’ve never stopped working. If you’re active, you can appreciate what you did in the past, you don’t feel like it’s gone.
– Actress Barbara Eden, Born on this Day in 1931