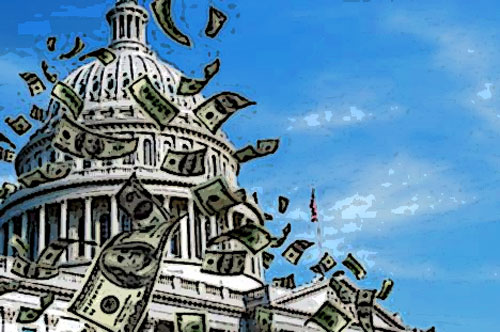 – French political thinker and historian Alexis de Tocqueville was born on this day in 1859 (died April 16, 1859).

Tocqueville’s Democracy in America (from which the above quote is taken) was written after his travels in the United States.

Kind of scary how right he was, isn’t it?

Think of all the things people expect from government these days: healthcare, birth control, a “living wage”, education, buildings, roads, pet projects, the list goes on.

Don’t get me wrong. Some of these are good things. But there is no way in hell that the government can deliver all (or most) of them efficiently.

Study after study has shown how much waste there is in government. Chances are, even those studies were done with government grants.

I don’t know where the switch was in the makeup of the average American that went from “I’m gonna make it on my own” to “I need the government to take care of me.”

More often than you probably know, I’ll just hide a story that someone has shared on Facebook rather than comment.

But in those rare occasions where I do still get involved, I start with this basic premise:

If you cannot agree with me on those fundamental points, then we’re not going to have a productive discussion.

These are not partisan statements. Democrats aren’t the only ones spending too much money in government. Republicans are just as guilty.

Actually, I think Republicans are more guilty, because, according to their creed, they’re supposed to know better.

It’s not going to get better until we end the idea of the career politician. The 7th District recently did that for Eric Cantor. I’ve got friends on the Republican side who would disagree, but I see this as a good thing.

But it’s not just Cantor. Consider:

John Dingell of Michigan has been in the U.S. House of Representatives since 1955.

FIFTY. FIVE. That’s 59 years. Three years before I was born.

The President at the time was Dwight D. Eisenhower.

Dingell is not alone.

John Conyers, also from Michigan, has been in Congress since 1965.

Lyndon B. Johnson was President.

Granted, Dingell and Conyers are still there because their constituents keep sending them back.

Both of these guys are from Michigan. What the heck is wrong with you people up there? Find yourself a hand-shaped map of your state and use it to smack some sense into your heads.

Still the problem is not just Congress alone. The federal government has grown into a self-feeding monster. More regulations and insanity come from federal bureaucrats who have way too much autonomy and authority.

I’d like to think Tocqueville could be proven wrong. I don’t have much hope because the government gives out stuff. And we like stuff.