365 Things I Believe: The Constitution

How is this race even remotely close? 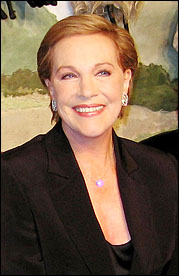 Forever in our hearts as both Mary Poppins and Maria von Trapp, Julie Andrews is a Hollywood icon.

A former child actress, Andrews made her Broadway debut in 1954 and later started in My Fair Lady and Camelot, earning Tony Award nominations for both. Her television debut as Cinderella was seen by over 100 million viewers in 1957.

From there she became Mary Poppins in 1964 and received the Academy Award for Best Actress. In 1965 she was again nominated for her role as Maria von Trapp in The Sound of Music.

Andrews continued to act and sing but without the same film success as her first two roles. She returned to Broadway in Victor/Victoria in 1995. She left that show in 1997 after developing vocal problems. Surgery for non-cancerous nodules left her unable to sing. She filed and later settled a lawsuit against the doctors at Mount Sinai Hospital in New York.

Andrews’ career had somewhat of a renaissance in 2001 when she appeared in The Princess Diaries, her first Disney film since Mary Poppins. She reprised the role in The Princess Diaries 2 and sang on film for the first time since her surgery. She was the voice of Queen Lillian in Shrek 2 and the sequels Shrek the Third and Shrek Forever After.

At the 53rd Grammy Awards Ceremony in February 2011, Andrews received a Grammy Lifetime Achievement Award and, with her daughter Emma, a Grammy for best spoken word album for children for A Collection of Poems, Songs and Lullabies.