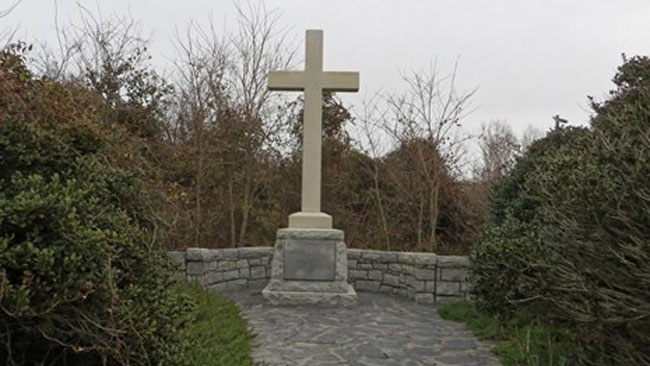 The Cape Henry Memorial Cross was erected in 1935 by the National Society of the Daughters of the American Colonists, in memory of the original wooden cross.

On this day in 1607, British colonists landed at Cape Henry, Virginia, the first landfall of the company that would establish the first permanent English settlement in North America.

Captain Christopher Newport, and the three ships, the Susan Constant, the Godspeed, and the Discovery, dropped anchor at Cape Henry, on April 26, 1607 before sailing up the James river where they established the Jamestown Settlement. 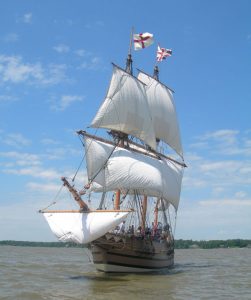 three days of fasting. Reverent Hunt who would later found the Church at Jamestown, said “From these very shores the Gospel shall go forth to not only this New World, but the entire world.”

I’ve mentioned this before. Growing up in Virginia meant that one year we would have Virginia history. We would study from Jamestown to just after the Civil War because by the end of May we were out of time.

The next year we would have American History and study from Jamestown (where it really all began) and get to just after the Civil War.

So we didn’t spend a lot of time in the early 1900s. That prompted me several years ago to begin reading the biographies of the Crowned Heads of Europe.

More recently, about four years ago now, I began focusing on the World War I era when I developed my script Clean Dry Socks: Diary of a Doughboy. It is based on my grandfather’s journal from WWI, with commentary provided by his oldest daughter, my Aunt Frances.

Even though I had that as source material, I felt the need to know more about the war, about the causes, about what really happened.

I read, I watched documentaries, I listened to podcasts. Even then I only began to scratch the surface.

What I’m getting at, of course, is the need for research.

My latest focus on Britain has sparked a new script idea. No, I’m not ready to talk about it yet, if ever. It’s going to take a lot of research. And I do mean a lot.

That goes against my nature. I would of course be writing and doing rather than reading and learning.

In a sense, that’s one of the reasons I don’t want to be a copywriter. I mean, sure if I could only get hired for jobs about things that interest me.

But that’s no way to run a railroad, or make a living. And I don’t have time (at least right now) to study trains.

Reading and research (not necessarily the same thing) can turn up some interesting, and sometimes uncomfortable facts.

So, editorialize all you want. It’s undeniable that this nation, wrinkles, faults, and all, began with a prayer.

We could use a little, or a lot more of that these days.

It’s Monday and I’m coming off of a busy weekend. The wife and I made a quick trip to Southwest Virginia to say farewell to her uncle who passed in February. The family was only able to schedule the graveside service this past Friday.

It was a quick, but important trip.

If COVID has taught us anything, other than a reminder that we can’t trust what the government and media tell us…too soon?…it’s that people are important and we shouldn’t miss the significant events.

Speaking of significant events, I’ve written about this before. The oldest of the offspring has a birthday today. He’s celebrating with friends in Atlanta. We’ll celebrate as a family later this week when he’s home.

Because events, and people, are important.

American comedian and actress, Carol Burnett, was born on this day in 1933 in San Antonio, Texas.