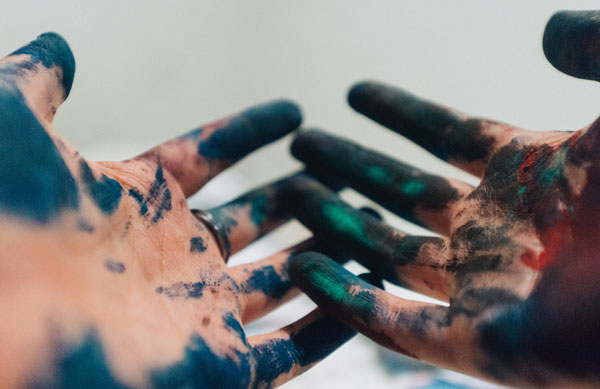 As promised last week, Friday’s for the foreseeable future will feature a short story.  This one, like last week, was also written for The Mighty Pen Project.

Staccato raindrops on the studio skylight lent a soft percussion to the Pandora Mozart station. A discordant note jarred Gary from his computer screen. He pulled the tea kettle from the stove and set a cup of his favorite raspberry and pomegranate tea, his weekly splurge, to steep.

Through the studio window the Seattle skyline mirrored the oversized canvas leaning against the wall. The Space Needle and the Columbia Tower broke through the overcast wetness across Lake Washington. He had about another week to finish the painting for the lobby of the New Market bank. Unlike the damned poster project, this project paid, and paid nicely. He returned the herbal tea bags to their place in the cabinet next to the ramen. Maybe when he finished this project he could upgrade to mac and cheese.

Gary looked forward to trading the computer-generated pixels for the pigments of his artist’s palate and focusing on real art. Right now. he needed work that put ramen in the cupboards of the studio which also served as his apartment. The current poster project took his time but did not purchase his groceries or pay the rent.

He thought himself lucky that the judge gave him community service for the unfortunate graffiti incident rather than a fine he couldn’t afford. He just wished for a definitive amount of time rather than “as long as it takes to finish the project.” The judge knew this project would be more than a few simple hours of work.

He took the steaming cup back to his workspace where he pulled a denim shirt over the wife beater he normally wore with his jeans. If he got around to it, he’d put on shoes when they arrived. He opened the files with his designs for the animal resource center fundraiser. The tea soothed him, a bit. Three poster designs rattled off the printer.

Susan and Jane, twenty-something professional women, members of the junior women’s club and in charge of the fundraising gala focusing this year on animal welfare, visited Gary on a weekly basis to check on his progress. Since the unfortunate graffiti incident happened on the exterior wall of their building the judge declared Gary an integral part of that fund raising event.

Certain that the latest design would meet their standards and specifications he anticipated the end of their visits. He had made every change they requested, or rather demanded, over the last six weeks. The date for the event approached and the posters had to get to the printer. After today he could turn back to projects that would, hopefully, be a bit more lucrative. He could almost taste the mac and cheese.

The intercom shrieked and he buzzed them in. Two minutes later the women stepped off the elevator and entered the studio with an air that insisted they were in control. That didn’t matter to Gary. He just wanted this project to be over and done with.

“I have the drafts ready for you to approve.”

As Susan bent over the work table to view the designs she ran her manicured fire engine red nails through her auburn hair. She pushed it out of her eyes and over her shoulders giving Gary a view of the black camisole lace she showed no concern about hiding. The color combinations fascinated the artist in Gary, and the low-cut lace stirred him elsewhere. He wondered about the bottles she found those shades of red in; and where she found that lace.

“We’ll certainly look at them. Approve may be too strong a word to use just yet.”

“I’ve made all your requested changes.”

Their continued visits had little to do with the actual promotion of the event. They didn’t believe it enough that he’d been caught or that the restitution through the community service erased his debt.

Jane lifted a sapphire blue silk scarf to her nostrils. She always complained of the smell of paints and solvents in the studio. Gary no longer noticed them, and he no longer paid attention to Jane’s affectations.

“Oh, these are interesting.”

Susan stood up tossing her auburn hair over her shoulders. She didn’t bother to attend to the blouse button that had come undone. She did bother to see that Gary noticed.

“These are quite good. But, they’re just not quite right. They still don’t convey either the feeling we’re looking for or the urgency of the needs of the animal resource center.”

Jane let the scarf fall from her face. “Maybe it needs a picture of puppies or kittens or something.”

“That’s a great idea. Gary dear, why don’t you try a few ideas like that and we’ll come back say, next Thursday and check them out?”

“But you rejected designs with puppies three weeks ago. I can bring those out again and you can choose from those.”

“We need something fresh. And do try to put some real effort into this. We’re running out of time and we need to start promoting the event.”

“I’ve given you over a dozen choices. I’m not sure what more you want. I really don’t have any more time to put into this.”

“Then perhaps you should have thought of that before the, what do you call it…unfortunate graffiti incident? We’ll be back next week.”

When they were gone Gary tossed the draft posters into the fireplace. He’d enjoy them watching them burn tonight with a couple of beers. He’d picked up a six-pack of Schmidt when he bought the tea. He knew that he should spend some time on the skyline canvas. Instead he turned first to a canvas hidden under a cloth out of the view of the women.

Taking the smallest of brushes he concentrated on the black lace of the camisole that barely covered ample breasts. Mixing shades of red and brown he highlighted the auburn hair flowing over the shoulders.

Satisfied for the moment, he went back to the skyline canvas and sketched in a faint view of Mount Rainier behind the city skyline. He loved the days, unlike today, when the mountain joined the skyscrapers on a background of clear blue sky.

Gary didn’t spend time on the posters the rest of that day, choosing instead to work furiously to finish the skyline canvas. He’d find the pictures of the damned puppies later and come up with some new suggestions.

That evening he sat in front of the fire while the posters burned. He popped open another beer and watched the red accents of the posters melt. Deep red. The color of blood.

He stood to gaze at the second canvas and thought that she had never looked better or more seductive. He studied the mixture of reds and black on his artist palate. Slowly he took the small brush again and mixed the red with a touch of black making the deepest shade of crimson. He carefully painted a pencil thin line across the neck of the woman on his canvas, stopping at the collar bone to add ever the smallest drop spilling down the chest.

He grabbed another beer and settled in on the sofa.

A soft ray of sun through the skylight woke him. He decided not to stoke the fire. In the kitchen, he tossed the beer bottles into the recycling bin and put on the teakettle. Waiting for the water to heat he fired up the PC to check email and search for freaking puppy pictures.

Scanning the morning headlines in the Seattle Times he read “Noted Animal Rights Activist Susan Clements found murdered.” He clicked on the link.

“Police found the body of Susan Clements just outside her University Heights apartment early this morning, her throat cut. Initial police reports do not indicate evidence of robbery or sexual assault. The police have no suspects.”

Maybe he did need that fire.

The whistle of the tea kettle brought him back to the moment. He put his tea on to steep and reached for the can of gesso on the shelf.

Slowly, meticulously, Gary painted over the canvas of the woman. It took three coats to cover the black and the red, but he persisted until the canvas stood before him, blank, white.

Gary went back to the skyline canvas. If he worked on it, he could finish today.

Jane called around 2:00 in the afternoon. The benefit must be delayed. It would now be held as a tribute to Susan. Of course that would mean a complete revision of the promotional materials.

Gary spent the next two days finishing and delivering the skyline canvas. The painting pleased both the bank president and the interior designer. They told him to expect the check in the mail. No mac and cheese just yet, but soon.

Two weeks later Jane visited Gary at the studio. He showed her poster designs. Posters of puppies. Posters of kittens. Posters dedicating the event to the memory of Susan Clements.

“These are a good start. I’m sorry, I can’t think; it’s just that the smell of the solvents you use is so strong.”

Jane held her blue scarf to her nose. As Gary opened a window, she took the scarf and tied back the blonde hair that Gary presumed couldn’t be a natural color.

“Can you do a combination of this version with the puppies and the tribute to Susan? If the puppies could be Dalmatians that would be great. They were Susan’s favorite.”

“I’ll work on that and have something for you next week. What’s the new date for the event?”

“Oh, we don’t have that yet. Probably at least six months, this gives us plenty of time to get it right this time.”

“Of course it does.”

Alone again Gary tossed the prototypes on the fireplace and pulled out the freshly gessoed canvas. He began to sketch. Once satisfied, he began the mixing of colors. He had to get to the exact shade of sapphire blue.