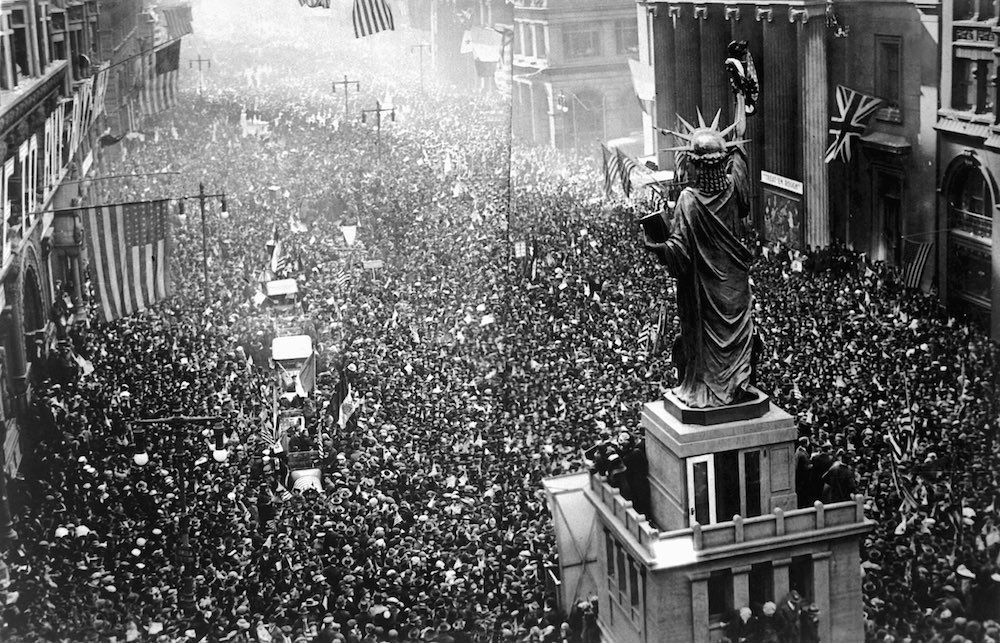 A crowd of thousands massed on Broad Street, New York, near a replica of the Statue of Liberty, to cheer as news of the armistice was announced to the public. IMAGE: INTERIM ARCHIVES/GETTY IMAGES

In November 1919, President Wilson proclaimed November 11 as the first commemoration of Armistice Day with the following words: “To us in America, the reflections of Armistice Day will be filled with solemn pride in the heroism of those who died in the country’s service and with gratitude for the victory, both because of the thing from which it has freed us and because of the opportunity it has given America to show her sympathy with peace and justice in the councils of the nations…”

In 1954, recognizing the service and sacrifices of World War II, Armistice Day was renamed to Veteran’s Day as a day to honor American veterans of all wars.

As a child of the 70s I graduated from high school about two years after the end of the Vietnam War. In spite of the lingering anti-war sentiments, some of my classmates chose the military path. I did not. After college graduation I gave serious consideration to joining the reserves or the National Guard. In the end, for multiple reasons, I didn’t pursue that.

I have written that I am where I am because of my choices in life and that I try to live life with no regrets. If I have any regrets, one may be that I have never worn the uniform of my country.

And they paved the way for Colin Kaepernick to sit on his ass during the National Anthem and choose not to vote this week.

You keep using that word protest, but I do not think that you know what it means.

While I am not a veteran, I do try my best to show respect and to honor veterans when the opportunity arises.

Over the past few years I have had some amazing opportunities to work with veterans on projects.

Just last weekend I participated for the third time in A Night at the Quartermaster Museum at Ft. Lee. I first worked at Ft. Lee Theatre in 2014 when I was cast in The Chalk Garden. That connection led my being asked to participate in the museum event. I have had the opportunity to play Eisenhower’s groundskeeper outside of his headquarters just before D-Day, a World War I doctor, and this year, a Vietnam Vet telling of “my” experiences at Khe Sanh.

Each time has given me a greater respect for our military and the freedoms we have because of their service.

This past spring I was honored to be a part of The Mighty Pen Project at the Virginia War Memorial. Designed as a writing class for veterans I was able to be grafted in because there was space available. It was an amazing class. But I gained most from being able to sit around the table with ten or so veterans who had really been there, Vietnam, Iraq, Afghanistan. There stories were real and inspiring, and each time I had to write my own story I felt a little intimidated. But they were all gracious and supportive. I was honored and humbled to be in their presence.

I originally applied for the class because of my interest in learning how to write about military experiences. My current script project is based on the diary of my grandfather from World War I. I never knew him; he passed away while my mother was still in high school. But he left the hills of Southwest Virginia, trained at then Camp Lee, and fought in the trenches in France during World War I where he was hit with mustard gas. His diary is on file with the Veteran’s History Project at the Library of Congress.

It was my experience at the Quartermaster Museum last year that inspired me to turn this diary into a stage presentation. What form that is remains to be seen. I’m working on it. But as I was portraying a World War I doctor and telling students and parents about the dangers of trench foot and that the best way to prevent that was “Clean Dry Socks” I recalled the words of my grandfather. During his time in the trenches he talked about putting on his last pair of clean, dry socks. I went back to re-read his diary which is when I discovered that he trained at Camp Lee, now Fort Lee.

I’ve told you before that I don’t believe in coincidence. Next year is the 100th Anniversary of Camp/Fort Lee. I don’t know what format it will take or if we’ll even get it on stage, but I almost feel as if I have a duty, if you will, to try to write and produce this piece. I’ve been sidetracked a bit this month with NaNoWriMo, but my goal is to have the first draft of a script done by the end of December.

There, I’ve said it. Now I have responsibilities.

Today however, is not about me or my script. It’s about honoring our veterans. Whatever you may think of the military or war or our political process, our veterans are those who have put their very lives on the line so that we can bitch and moan about the things we don’t like.

Find a veteran to thank today. Buy them coffee. Buy them lunch. Give them a hug.