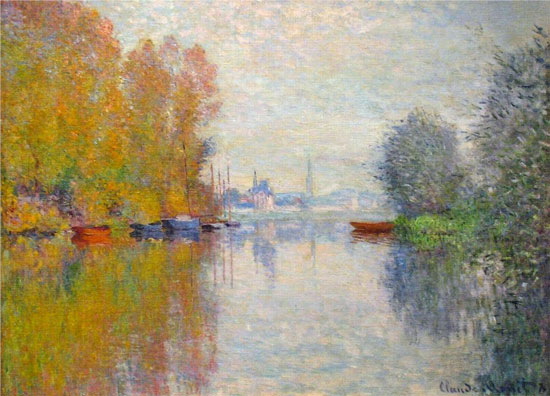 Autumn on the Seine at Argenteuil – Claude Monet

Face it, Elie Wiesel had horrible memories, much of them told in his autobiographical Night.

In Night, Wiesel said “I wanted to show the end, the finality of the event. Everything came to an end—man, history, literature, religion, God. There was nothing left. And yet we begin again with night.”

Night is the first book in a trilogy that includes Dawn and Day. Books I have now placed on my reading list.

Remembering things like the Holocaust can be painful. But it must be remembered.

Here in the Old Capitol of the South, it’s often hard to remember The War Between the States, conversely known as the War of Northern Aggression.

There are efforts by those who wish to erase all symbols of anything Southern. I’ve said this before as well, the Confederate Flag doesn’t need to fly anywhere on publicly owned property than in historical context. But that historical context should not be erased.

I have mixed emotions about the Davis statue, some 100-plus years old. Yes we all know the historical context in which it was raised. But does removing it mean we risk forgetting the past?

Of all the statues on Monument Avenue, this one sticks out because Davis was not a Virginian, and didn’t really “fight” for the cause, unlike Robert E. Lee and Stonewall Jackson who were, first and foremost, defending their homeland. That’s not up for debate, at least not here on my real estate.

More than those men, who also fought under the American flag, Davis is a symbol of the Confederacy. So maybe he doesn’t belong on Monument Avenue.

But if you want to remove him then you need to ask the questions that Morrissey didn’t answer: How? Where does it go? Who pays for it?

Not to mention what goes in its place.

The thing about memories is that they may be uncomfortable. And sure, we all have things we wish we could forget.

But we risk forgetting or erasing where we came from at our own peril.

We have to remember what we were so that we’re not tempted to become that again.

That’s a little heavy for a Friday, and the last day of September.

But seriously, try to remember.