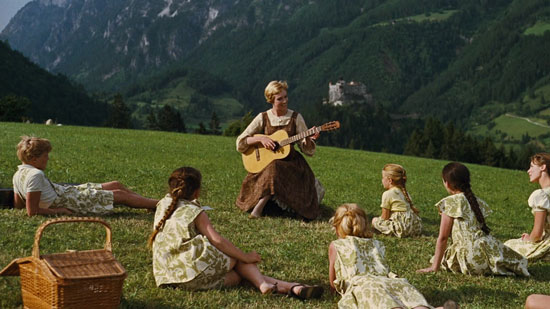 I must dream of the things I am seeking.
I am seeking the courage I lack.
The courage to serve them with reliance,
Face my mistakes without defiance.
Show them I’m worthy
And while I show them
I’ll show me!

As sung by Maria in The Sound of Music.

American playwright and composer Richard Rodgers, born on this day in 1902 (died 1979), wrote this song for the film adaptation of The Sound of Music.

I am not heading to be a governess for seven children.

Although, a house with two boys, two dogs, and a cat is nothing to sneeze at. Unless you’re allergic to cats.

And, on a side note, if you’re a casting director, don’t rule me out until you’ve heard me read.

The wife and I are freshly returned from a weekend in which my confidence was both renewed and shaken. We spent our time on the campus of Asbury University where we met…well, a long time ago. We were back for her class reunion.

It’s a wonderful opportunity to spend time with friends you’ve not seen for decades and to catch up on their lives, their joys, their sorrows. And perhaps to share a few of your own.

There’s always a tendency for me to look at the careers of some and wonder where I took that wrong turn (was it Albuquerque?).

And then I remember, no, it’s not that at all. Sure, I took different paths. We all do. That’s what life is all about.

And perhaps in the most encouraging thing I heard all weekend the Sunday morning sermon talked about Christianity and slavery. No that’s not the encouraging part, let me finish.

It’s true that Christianity not only approved of, but often endorsed human slavery. But told less often is the story of how Christians also led the fight for the abolishment of slavery. It’s a history lesson I won’t get into too deeply here, for one reason I’m sure I’d not tell it correctly.

But, among those who had a great impact on the abolishment of slavery in England was John Wesley. Asbury is a a school in the Wesleyan-Holiness tradition. The University is named after the first American Methodist Bishop appointed by Wesley.

Wesley was a great influence on William Wilberforce who lead the fight in Parliament for the abolition of slavery, along with notable individuals such as Granville Sharp and Thomas Clarkson.

But Wesley’s attention was first drawn to the issue when he read a book by Pennsylvania Quaker Anthony Benezet.

I’m butchering the history lesson. I need to go do some research and reading on my own.

Wesley was 69 when he first read Benezet’s work. The age 69 in 1772 was a lot older than it is today. Wesley lived another 19 years and his final letter was to William Wilberforce in which he wrote:

Unless God has raised you up for this very thing, you will be worn out by the opposition of men and devils. But if God be for you, who can be against you? Are all of them stronger than God? O be not weary of well-doing! Go on, in the name of God and in the power of His might, till even American slavery (the vilest that ever saw the sun) shall vanish away before it.

I may be staring retirement in the face. Although, truth be told, retirement refuses to look me in the eye just yet.

But, at 58 (as of next week, presents accepted via PayPal), I can be confident that there are still good things that I can do.

I can’t change the world. I can’t fix the Presidential election (and I’m really sorry about that). I can’t tell boys to pull their pants up (except inside my house if the occasion calls for it).

But I can have confidence in the things I can do. Maybe to make my little corner of the world a little better. Maybe, no definitely, to finish that script, and that novel.

The writer of Hebrews says:

Therefore, since we are surrounded by such a great cloud of witnesses, let us throw off everything that hinders and the sin that so easily entangles. And let us run with perseverance the race marked out for us, fixing our eyes on Jesus, the pioneer and perfecter of faith. For the joy set before him he endured the cross, scorning its shame, and sat down at the right hand of the throne of God. Consider him who endured such opposition from sinners, so that you will not grow weary and lose heart.

Your faith journey may vary. And, we all know that I just don’t run.

But, wherever we are in life we can, and should have the confidence to keep going.