Laughter is the closest thing to the grace of God.

I got in some good laughs over the weekend. Both at Mrs. Parliament’s Night Out at Huguenot Community Players (full disclaimer, my wife is in the cast), and at Guys and Dolls at Henrico Theatre Company. Both great productions with lots of talent lots of laughs. Both run through May 22.

I also got some laughs when Sarah Palin said that Paul Ryan is going to get “Cantored” for his non support of Donald Trump. She’s going to sing to him? No she’s talking about Dave Brat’s ouster of Eric Cantor last election primary round. First, unless I’m reading things wrong Ryan hasn’t said he would never endorse Trump, just that he’s not ready to yet. The two have an upcoming meeting of the minds. Second, while I admit to supporting Dave Brat over Eric Cantor because I thought Cantor lost touch with his constituents, why would Ryan’s district listen to Sarah Palin? Third, with all due respect, why is anyone still listening to Sarah Palin?

The perils of upstaging your co-star…

On this day in 1849 a dispute between actors Edwin Forrest and William Charles Macready resulted in a riot at the Astor Opera House in Manhattan that left at least 25 people dead and over 120 people injured.

Actor John Wilkes Booth, who would grow up to assassinate Abraham Lincoln was born on this date in 1838. Booth shot Lincoln on the evening of April 14, 1865. Lincoln died the following day. Booth was tracked and, refusing to surrender was shot to death on April 26. 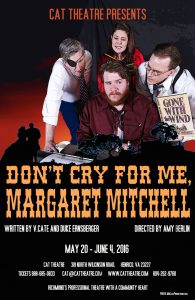 In happier dramatic news, American director and producer David O. Selznick was born on this day in 1902 (died 1965).

Selznick will be hilariously portrayed by Richmond actor Matt Hackman in the upcoming production of Don’t Cry for Me Margaret Mitchell opening on May 20th at CAT Theatre. Filming for Gone with the Wind has begun but the script is more than a bit stinky, Selznick locks a well known writer, who unfortunately has never read the book, in his office for a week to rewrite the script. Hilarity ensues. And the poster for this production was done by a pretty kick-ass graphic designer…if I do say so myself.

This is one of those posts that make you count back nine months and realize that must’ve been summer vacation, because also born on this day in:

Finally, on this day in 1954, Bill Haley and His Comments released Rock Around the Clock, the first rock and roll record to reach number one on the Billboard charts.