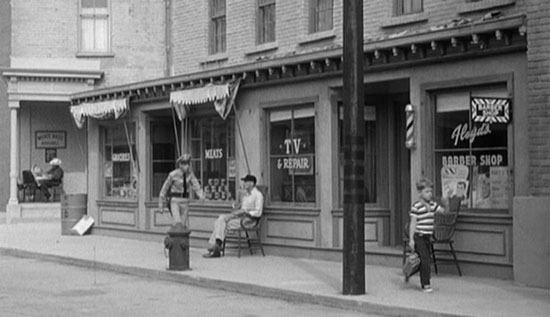 [Mayberry was] a wonderful place to visit and people would fantasize about living there. It’s a place like Brigadoon that shows up every hundred years. It’s a place you dream about living, but you know it’s fantasy and you don’t care. I grew up among people very much like that — a bigger town, but not much bigger — and the neighborhood was very much like that and the people were very much like those characters. And it was fun for me to visit, too. It was one of my favorite half hours ever on television and that was long before I met Andy [Griffith].

American actor, singer, and dancer, Ken Berry, was born on this day in 1933.

If you’re of a certain age and grew up watching the Andy Griffith Show, you have fond memories of Mayberry, North Carolina.

When Griffith left the show and it morphed into Mayberry R.F.D. you were sad, but you still watched.

And when you marry into a family from North Carolina, you get a lot of Mayberry references.

I grew up in small town America. I suppose life did seem simple then. At least looking back it does.

I’m pretty sure our sheriff always carried a gun. And I’m not sure I ever knew the sheriff personally.

But it was a time when we got two television stations. Technically three but one was the same network and always a bit fuzzy.

That’s right, I grew up without ABC.

I never saw The Brady Bunch until years later when we got cable.

I’ll pause for you to mourn my underprivileged childhood.

Granted, my childhood memories are faded by the passing of the last fifty years.

But I look back on those simple times.

The wonder of a parade or “The Lord’s Acre Festival” which, I believe, still continues.

The simplicity of going to “Luke’s Store” on Sunday evening to get a dime’s worth of penny candy.

But the memories are valuable. They are part of who I am.

Who I am as a general, all-around, good guy.

We’re all the sum of our past. Mine just may be simpler than yours.

I don’t think I long to return to that simplicity. In reality I doubt that it was that simple.

It’s probably just that I wasn’t in charge.

Okay, there’s some merit in returning to not being responsible.

But the reality is my next phase of not being responbile will likely involve adult diapers and soft foods.

I’m pretty sure I’m not going to write about that.