I for one welcome our new European overlords… 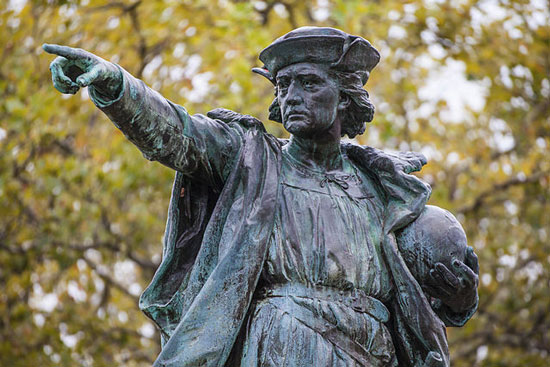 On this date in 1428 Christopher Columbus lands in the Bahamas, believing he had reached the Indies.

Growing up most of us were taught the romanticized version of how Christopher Columbus discovered America. We learned how the explorers were welcomed and how they were kind to the natives they called Indians.

They say the victors write the history books.

I’m not going to quibble.

Much of what we “know” in history isn’t exactly how it happened. I’ve talked about that before.

A lot of the “truth” about history depends on who is telling the story.

For years we were taught about the glorious settling of the “New World” by the Europeans.

The truth is, the Europeans weren’t always that nice. That may be putting it mildly.

We all need to read and understand a lot more history.

I’m not going to be one of those who argues for the doing away of all things Christopher-Columbusian.

Personally, I don’t get all that excited about Columbus. But, as a government worker, I’m happy to have the three-day weekend.

Still it took a lot of ugly to get here. I don’t know who I first heard say it but many of the Europeans came with a cross in one hand and a sword in the other.

We can’t forget that.

And by not forgetting that I mean that we should not erase references to Columbus, or to slavery, or to the Confederacy.

We need to remember those things. Maybe we don’t celebrate them. Or we commemorate them in different ways.

But taking names off of buildings or eliminating holidays and even the absurdity of tearing down statues?

Don’t we have better things to be doing?

Yeah, we really do.

Let’s remember our past and vow to be better in the future.

As humans, and more specifically as Americans, we’ve gotten a lot of stuff wrong over the years.

There’s no disputing that. All I’m saying is that we shouldn’t dwell on it.

Our focus on the wrongs of the past should be making sure it doesn’t happen again.

Which is to say let’s worry about the right that is.

How humans treated each other 500 years ago is far less important than how we treat each other today.

Use some of your day off to think about those things.