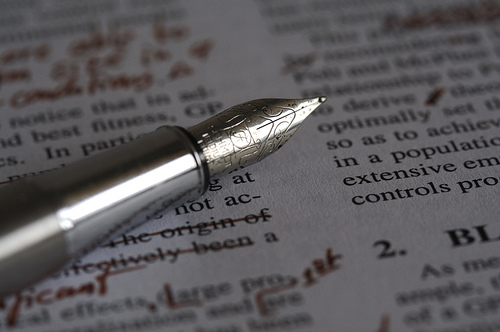 “I believe more in the scissors than I do the pencil.”

Currently my novel is in the revision, not editing, process.  Revision because there are parts that need to be rewritten (or written), or moved.  Once those are all in place I’ll get to the editing for grammar, spelling, and punctuation.

At which point I’ll promptly ask someone to edit it for me.

I crank these blog posts out on the weekend.  Don’t act so surprised. If you’ve been reading here, you already know that.

Sometimes in my rush to get them scheduled, I make spelling or word choice errors.

I appreciate that very much.

The truth is that I can read an article or a post dozens of times and never catch a mistake.  I’ve just lived with it too long to see it.

Sometimes in real life, as opposed to life as a writer, which is real, but not what I meant.

Sometimes in other walks of life it would be good to have an editor for spoken remarks.

Aren’t we going through a season of political campaigns where that is especially true?

A candidate will say something and shortly thereafter we’ll get the “that’s not what I meant to say” press release.

Was it really a mistake?

I understand completely the power of the misspoken word.

I’ve seen it sink many a candidate.

I also fully understand how sometimes it could just be a stumbling over trying to find the right words.  In the heat of an interview or a press conference, it’s difficult to think on your feet.

It’s even more difficult if you’re not exactly being honest.

…hold it, I’m not being honest.

Mark Twain is reported to have said,

“If you tell the truth, you don’t have to remember anything.”

And you may have less need for an editor.

But, back to the written word and what Capote was talking about.

Much of what we see in print is only a fraction of what was originally written.  I know when I work for a client I write an article and frequently have to edit it down to a specific word count without losing the important parts of the article or without changing the overall tone.

Sometimes that’s more challenging than others.

Or at least twice.