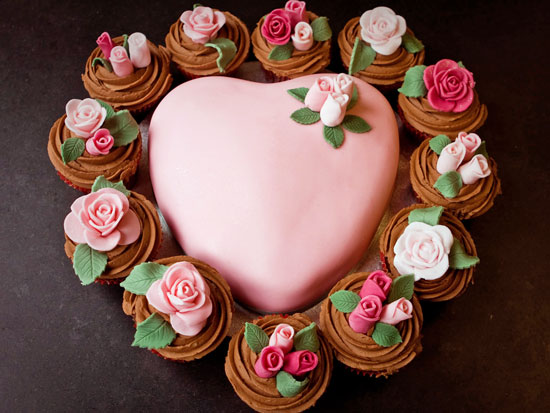 All cakes appearing in this work are fictitious. Any resemblance to the real cake is purely coincidental.

Today’s headline may be a little indelicate, but cancer doesn’t deserve proper decorum.

Sometime during this week about twenty-four years ago, probably on February 14, not 13, my wife baked me a cake in the shape of a heart. It was her Valentine’s gift to me. We didn’t have a lot of cash to spend and going out to dinner was out of the question. You’ll understand why in a moment.

I still remember that cake as one of the most delicious I have ever had. It was a simple chocolate cake with pink icing. It may have been a simple box cake with canned icing (sorry, Honey), I really don’t know. But, I loved it.

I’m not asking for another cake. Seriously.

The cake is significant because it came at a time when I didn’t care much about the taste of food. I was in the middle of radiation treatments and nausea was a constant companion for weeks, and even a frequent guest in the months following the treatment.

Let me back up. I’ve told the story before, but it never hurts to tell it again.

Just before Christmas in 1990, I was diagnosed with testicular cancer.

I had thought I had a problem that summer, but my general practitioner dismissed it. He did give me a referral for a urologist, which I ignored. But the problem got worse. I’m not going to draw a diagram. You do the math.

I was producing a major conference in December and told myself I’d take care of it after that. On occasion, I’d stop in the bookstore on my way walking home from the Metro and look through some medical books. The news was not promising.

When the conference was over, I finally went to the doctor. He sent me immediately that afternoon for a sonogram and told me to come back the next morning.

I did all of that and on Friday morning he told me I needed surgery as soon as possible. He wanted to schedule it for Monday, but the operating room in DC’s George Washington Hospital was not available until Wednesday, December 19th.

We quickly scrambled our Christmas plans. My wife took a quick trip to North Carolina, because on the same Monday that the doctor wanted to do my surgery, my father-in-law and stepfather had prostate surgery, and we found out later that my wife’s aunt had a mastectomy. Only my stepfather’s was not malignant. Stories like this are not made up.

I had successful surgery on that Wednesday. January was a seemingly endless round of tests and procedures and in February I started radiation treatments. They were largely precautionary, but they were nasty.

Still, I was very, very fortunate. I went back for follow up exams every six months for the next four years. When I told the doctor I was moving to Richmond he said “go, have a good life.”

Now, the only lingering effect is a particular distaste for the smell of hospitals and that fact that I’m lucky enough to get to have a colonoscopy more frequently than every ten years. Because of the last one, I’m currently on a three year rotation.

Still, I am very, very fortunate.

Not everyone is as fortunate as I am. I had a friend from our church in DC go through a very similar experience. A little less than 20 years ago, I returned to DC for his funeral.

Why am I retelling this story?

Because it needs to be told. And because every young man between the ages of 20 and 40 needs to become quite familiar with the boys, and not just for playtime.

I told you there’s nothing delicate about cancer.

But if you fit that age profile you should be doing regular self exams and if you suspect even the slightest difference, run, don’t walk to the doctor. Just get dressed first.

I’m also telling this story because I am once again walking in the Ukrop’s Monument Avenue 10K and I am participating in the Massey Challenge to raise funds for the Massey Cancer Center.

I walked last year, and I’ve talked about the fact that I got a foot injury that took about five months to heal. I’m risking that again. But this time in better shoes.

You can go to my personal page here to contribute. I promise I’m walking it, rain or shine.

Cancer kicked me where it hurts.