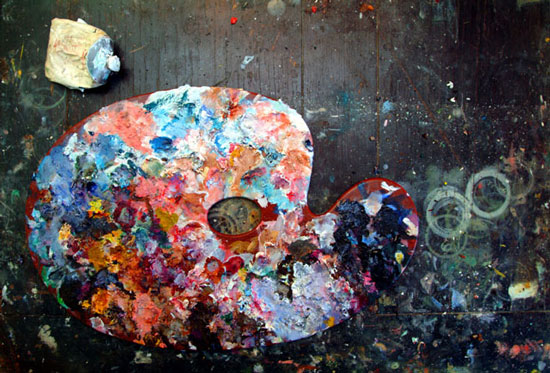 I wrote a couple of weeks ago that my family bought me some art supplies for Christmas and that I’m “Back to the Canvas.”

I’ve wanted to return to painting on canvas for a long time.  But it always seemed like there were better uses for the money than art supplies. Especially since I was already busy enough with other stuff.

So, I’ve been giving it a shot.

First I reworked the background of a canvas that has been hanging on the wall in our garage since we moved here…in 1996.  And I think I actually started it before we were married…in 1986.

I’m happier with the background and I’ll get back to it, but what I wanted to start on was my Stations of the Cross series.  I’ve sold several of the photoshop versions of these, but I want them on canvas.

That time you think the paints and brushes you got for Christmas may be defective because they’re not doing what you’re telling them.

A friend responded that it will just take time.

The art and design that I’ve been doing over the past ten or more years has been mostly through some version of photoshop.

There’s been very little that I’ve sketched or painted by hand. It shows.

I’ll get there.  But for right now what I want to do is drive down to Hobby Lobby and pick up a big tub of Gesso so that I can cover this up and start over completely.  I’ll be doing that sometime in the next week or so.

I have to wonder if Michelangelo ever looked up at the Sistine Chapel ceiling and said “this is crap!  I have to start over.”

I’m not comparing myself to Michelangelo.

But I do have a couple of ceilings that need painting.