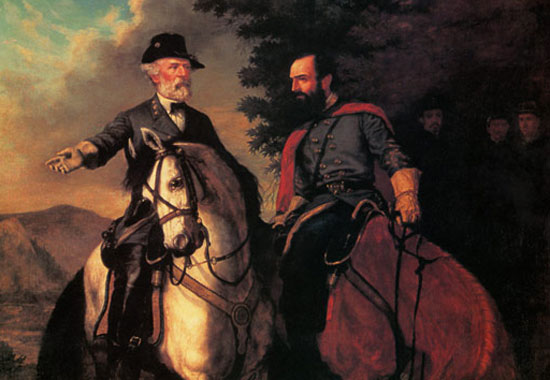 For giving us a four-day weekend.

Today in the Commonwealth of Virginia is Lee-Jackson Day. Yes, we still honor our Confederate Generals.

To give you short version of the history, the third Monday of January was a state holiday, Lee-Jackson Day, for many years. When Martin Luther King, Jr. Day was signed into law as a federal holiday by President Reagan (yes, that’s right, a Republican), for several years Virginians observed Lee-Jackson-King Day. That bothered people.

Governor Jim Gilmore sought to do something about this that he thought would appease both sides.  To make a long story short, during his Administration Lee-Jackson Day became a Friday holiday and Martin Luther King, Jr. Day remained a state and federal holiday on Monday.

The result?  State employees get a four-day weekend two weeks after the Christmas holidays.

Was it the right thing to do?  I don’t know.  I’ve written before that the extra cost to the government concerns me, but as a state employee I’ll take the day.

Still there are those who would seek to eliminate the day altogether.

I do understand the hatred for all things Confederate.  I don’t necessarily share it.

Again, I’ve written before that I believe most in the South were honorable men and women fighting for their homeland.  Yes, of course they were horribly wrong about slavery.  That’s not debatable.  But please don’t try to tell me that the North was full of angelic abolitionists.  It’s just not true.  History tells us otherwise.

We should learn from history.  We should not try to pretend it didn’t happen.

It’s like the show that I’m currently in rehearsals for.

Parade is the story of Leo Frank, a Jewish factory supervisor from Brooklyn, transplanted to Atlanta.  Frank was falsely accused of murdering fourteen-year-old Mary Phagan.  He was sentenced to hang, had his sentence commuted by the governor, but was later lynched.  In the 1990s, a witness came forward and Frank was exonerated.

As I’ve explained to people who ask me “it’s a musical?”  Yes, it is.  With hauntingly beautiful music.  But music and words that do not try to hide the history.

Our director has told us many times that, while the words and subject matter may be uncomfortable, what we’re doing is telling a story.  And we’re telling a story that is as true to the actual facts as possible.

I play both a retired Confederate Soldier and the Judge who sentences Frank to his death.  Neither man would necessarily be considered honorable based on their actions.  But they deeply and passionately believed they were right.

Truth be told, I’m a little uncomfortable with some of my character’s actions in the script.  But, again, I’m telling a story.  I’m acting.

I believe the arts allow us to tell those stories that otherwise would make us most uncomfortable.  We have an ugly history in this country.

But I shouldn’t be hated because those things are in my past, my heritage.  Yes, a quick search of genealogy records can document both a slave owner and Confederate soldiers.

Let’s be clear.  The slave owner died nearly 300 years ago.  And the Confederates have each been gone for well more than a hundred years.

I will not attempt to make excuses for them.  But they lived and existed in a time when life was very different.

We all have to learn.

And that learning comes from accepting history for what it was.  Good, bad, and ugly.

As in, it may be an ugly reason, but I have the day off to think about it.