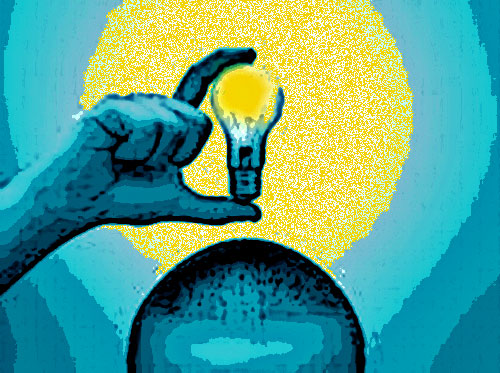 I had a brainstorm this week.

No, I won’t give you the details now, partly because I don’t have them all yet. But let’s just say I was sitting in a meeting and the light bulb came on.

To the entrepreneur or the creative individual, sometimes the same person, sometimes not, ideas are what we thrive on. It’s what motivates us to keep going.

But it does mean that when one idea is shot down, we seek another.

Maybe while there isn’t anything new under the sun, there are different ways to approach things.

Seth Godin writes today, “The popular, obvious, guaranteed ideas have definitely been taken, or are so small that they’re not really worth your blood and tears.”

What does that mean for the artist? For the writer? For the entrepreneur?

In short it means that you need to look beyond the popular and the obvious. If “everybody is doing it” don’t waste your time and originality in doing the same.

It also means taking a risk.

Big ideas can be scary. They can also be worth it.

The people who have moved ahead in life and done great and remarkable things generally didn’t succeed because they took the safe route.

As for my idea?

I’m on the first day of my vacation. I have some errands to run today, including picking up the 14-year-old from camp, stocking up on provisions (translation: wine) and mowing the yard before the neighbors get out the torches and pitchforks.

But we leave for the beach on Sunday. Come Monday morning, my ample backside will be firmly planted in a beach chair to watch the sunrise.

There I’ll think about my big idea. I’ll weigh the options. Make the plans.

Maybe the idea is a little crazy. Maybe it’s brilliant.

Maybe it’s both. Or not.

“When one door closes another door opens; but we so often look so long and so regretfully upon the closed door, that we do not see the ones which open for us.”

I’ll be pondering that this week. Maybe my big idea isn’t the open door I’m looking for.

In that case, I’ll just ask Mike Wazowski to bring me another door.