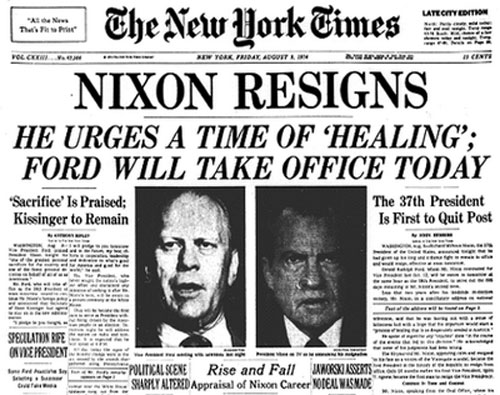 I watched the Nixon resignation with sadness. I was just sixteen, but it had a profound effect on me. I believed in our country. I still do. I believed in the Republican way. For the most part, I still do, but the party doesn’t.

Meanwhile, the U.S. President who came to national prominence speaking out against the war in Iraq just launched airstrikes on Iraq.

Thousands of Iraqis were trapped by Sunni militants, facing starvation and dehydration if they stayed in the mountains and almost certain death if they sought relief. Reports have been coming out for days, if not weeks, that the radicals were crucifying and beheading Iraqi Christians.

So, Friday President Obama announced airstrikes in the region.

If we’re to believe The New York Times, and granted, we rarely do, the strikes were prompted not out of some sense of the moral thing to do, but out of the fear of another Benghazi.

A senior administration official, speaking on the condition of anonymity, told the NYT, “The situation near Erbil was becoming more dire than anyone expected…We didn’t want another Benghazi.”

Following the horror stories from the Department of Veterans Affairs, President Obama signed into law a $16.3 billion measure that is meant to help overhaul the program.

Don’t get me wrong, the measure is seriously needed and way overdue. The stories we’ve heard about how our veterans have been treated are disgraceful.

But does no one have a problem with giving the money to the people who had the problems to begin with?

Closer to home, Maureen McDonnell gets run over by a bus.

In case you need a reason to celebrate today is…