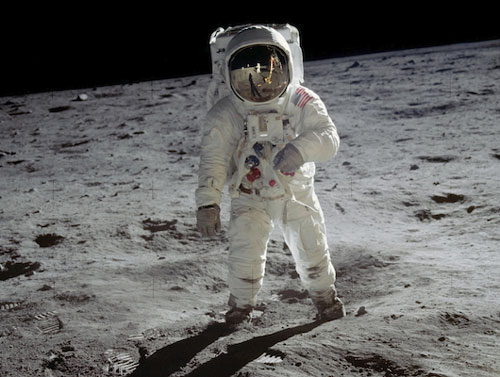 The news media and social media have been full of stories about where everyone was this particular week in 1969. It was the week of the Apollo 11 mission and the day, July 21, 1969 that Neil Armstrong first walked on the moon and uttered the now immortal phrase:

“That’s one small step for man, one giant leap for mankind.”

Person after person has posted on Facebook that they remember sitting up in the middle of the night to watch.

Me? I honestly don’t know. I have a vague recollection of my brother watching. I’m not sure if I stayed up or not.

It was 45 years ago. Sometimes I have trouble with the last 45 minutes.

Still for some reason I’m not sure I watched the first steps on the moon when they happened.

Whether I, as an eleven-year-old, was awake that night is secondary to the fact that the eyes of the world were watching an American achievement. A triumph of the American spirit.

In the year following the assassinations of both Bobby Kennedy and Martin Luther King, Jr., a time when our country was divided over the Vietnam War, we needed something to unite us. Something to cheer for.

It was the best of the American spirit.

And it took guts.

Sometimes having guts is all about doing what others say is impossible. It’s about facing a challenge and saying “It can’t be done, but I’m going to do it anyway.”

It’s about ignoring the doubts, and the doubters.

Writers face doubts all the time. Will my story ever be finished? Will anyone ever read it? Will I ever have anything else to write about?

There’s a part of me that knows if I am to make a career out of full time writing that I may have to take a giant leap.

But for now, it’s one step at a time.

And, by the way, if you’re casting a production of Cat on a Hot Tin Roof, I could rock the part of Big Daddy Pollitt.