An Anthology of Madness: A Review

All Goofy Things Must Come to an End 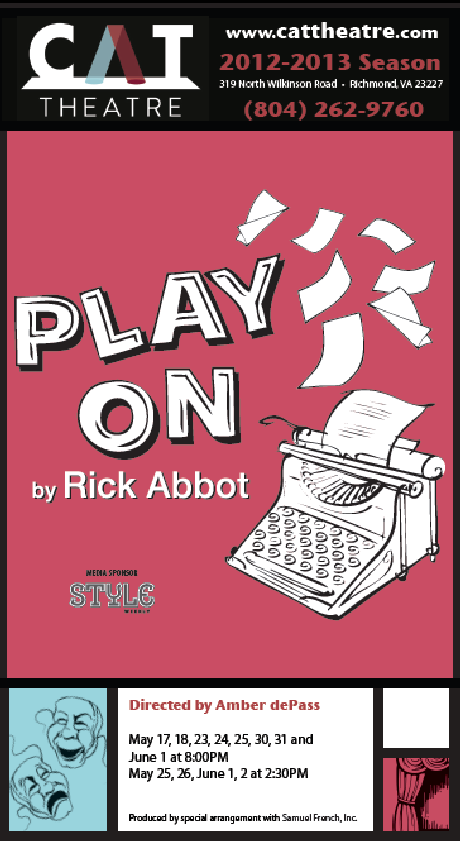 This afternoon was the final performance of Play On! at CAT Theatre in Richmond. I had the awesome experience of playing the role of Henry Benish in this British farce written by Rick Abbott.

This is my second appearance with CAT Theatre this season, having earlier this year played the role of Fred Narracott and been part of the backstage running crew in And Then There Were None.

I studied theater in college and then life got in the way with job changes and politics and most importantly, family. For the past 15 or so years, my family and I have been part of the Music and Fine Arts Ministry at West End Assembly of God.

But a couple of years ago I branched out into auditioning for shows in the Richmond Theater Community. For a city of this size, Richmond is amazingly loaded with talent and quality productions. I landed my first role last summer as Potiphar in the Dogwood Dell production of Joseph and the Amazing Technicolor Dreamcoat. Then this winter, I was cast in my first role at CAT.

It’s rather an amazing thing. It took me fifty years to decide what I wanted to be when I grow up. A writer, an actor, and an artist. That was all confirmed with me in one of those amazing mornings on the beach last summer.

I’m not yet at a point where this will make me a living. But I’m fortunately in a job that I can do in the daytime and which allows me to write and act at night. The art is coming…slowly. I’ve been doing some design projects, but I still want to get back to the canvas and paints.

I’m grateful too that my family is tolerating my attempts to burn the candelabra at all 24 ends (work with me).

So for now, the curtain closes on Play On! and it’s been a hilarious ride, both on stage and off. I’ve worked with an amazing director, an amazing cast and an awesome crew. I’ll hate to say goodbye, but it’s time.

Besides, this week I get into the full schedule of rehearsals for Footloose at Dogwood Dell.