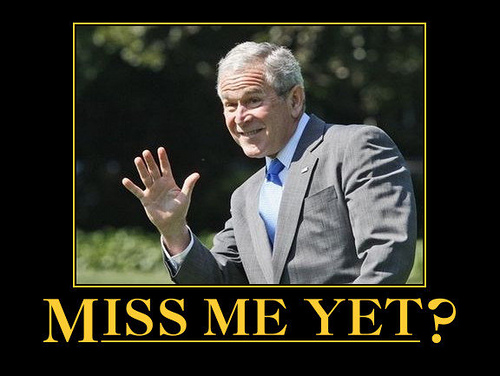 I’ve always said that history would be a kinder judge of the Presidency of George W. Bush.

The George W. Bush Presidential Library will be dedicated this week and The Washington Post reports, ” A new Washington Post-ABC News poll suggests that the passage of time and Bush’s relative invisibility have been beneficial to a chief executive who left office surrounded by controversy.”

Unlike other recent former Presidents, George W. Bush h as been relatively quiet about the disastrous Presidency of Barack Obama, even when Obama has spent five years blaming his predecessor for his problems.

Ron Fournier in National Journal
Go Ahead, Admit It: George W. Bush Is a Good Man
In the rush to mythologize and demonize our presidents, we forget they’re human.

Jennifer Rubin in The Washington Post
Only when we see a robotic, cold president like Obama do we remember fondly the tender, tearful love of country Bush often conveyed and the steely anger directed at our enemies. Only when a president completely bollixes up our relationship with both the Palestinians and the Israelis do we recall how warm and productive was our relationship with the Jewish state under Bush and how Israel proved willing to take “risks for peace” under the right circumstances. And only when we see our current president kick our friends and kowtow to our foes can we fully appreciate a president with strong personal bonds with leaders (e.g. Tony Blair) and fierce determination not to appease our foes.

Ken Mehlman in USAToday
The opening and dedication of the George W. Bush Presidential Center this week offers Republicans an important reminder: We can win the votes of non-whites, but only if we try. President George W. Bush won an historic share of Hispanic voters and grew African- and Asian-American support by acknowledging the different and often difficult experiences of many minorities, while pursuing policies that recognized the universal appeal of freedom and opportunity. As Republicans look to the future, our party might revisit this approach.