365 Things I Believe: Laugh at yourself 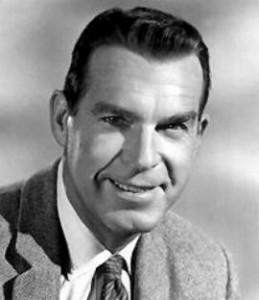 Fred MacMurray appeared on Broadway in 1931 with Bob Hope and Sydney Greenstreet in Roberta. He signed with Paramount Pictures in 1934.

He starred in multiple films working with Directors Billy Wilder and Preston Sturges. Among others, he appeared with actors Humphrey Bogard, Marlene Dietrich, Claudette Colbert, Katharine Hepburn and Carole Lombard.

In the 1960s, MacMurray started as Steve Douglas in My Three Sons which ran for twelve seasons. He retired from acting in 1978.

He was the first person to be honored as a Disney Legent in 1987.

MacMurray suffered from throat cancer and leukemia. He died on November 5, 1991. He was 83.

Happy Anniversary to my bride of 36 years! We sure