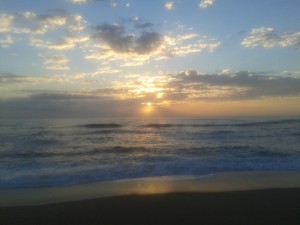 This morning, I took a walk on the beach for the first time in over a year. Two years since I was on the Outer Banks of North Carolina. While the surf was active, it was a peaceful morning. When I got there I only saw one other person walking her dogs.

I find strength and peace at the beach, and wish I could get here more often.

The sunrise, as it came from behind a bank of clouds, was magnificent. As it slowly came up it lit the clouds from behind, first with a golden edge, eventually breaking through and shining down on the water.

I watched as this was one of the most amazing mornings I can recall.

I thought, “Early in the morning, our song shall rise to Thee.”

What an awesome display of his creation.

I laughed at the absurd thought that anyone, “educated” or not, could possibly believe this happened by chance.

To think otherwise is absurd.

“But” the evolutionist will cry “But we have this progression.” Yes, we do. A progression, that is eloquently described in the book of Genesis.

This is my father’s world. He designed it. He created it.

Satisfy us in the morning with your unfailing love,
that we may sing for joy and be glad all our days.
~ 90:14