Why Can’t We Behave?

Can we really trust any day at this point?

My day began as usual. Up early because I’m bound and determined to keep that gym schedule I told you about. I did the reading in The Daily Bible. Let’s just say I’m really looking forward to getting into the New Testament. I think sometime in October.

Then I headed to the gym.

Before I left, I took care of the livestock. We have two big dogs and one enormous cat. I am convinced that, if I never went downstairs in the morning, they would stay upstairs until time to cross the rainbow bridge. Maybe not. All I know is that every time I hit the top step they all desperately need to go out. Except the cat because he hasn’t eaten since the Ming dynasty.

Or three minutes ago.

I got to the gym and was pleased to see that the pool area was mostly uninhabited, at least until I came out of the locker room. Since the gym reopened four weeks ago, I’ve been almost every day, alternating between the pool and the treadmill.

I was already a little cranky because of the scales. They lies to us. We hates them, Precious.

On weekdays the lap lanes usually fill up. Since I’m mostly walking these days, I’ll hit the exercise pool.

I’ll get back to the lap lanes. But late last year I had a foot injury that kept me out of the water. When it was 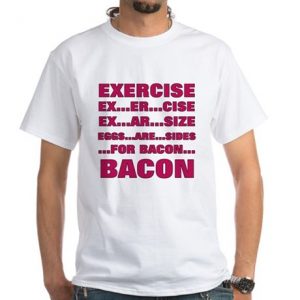 healed and I was ready to return in March, everything closed.

Anyway, I was the only person in the pool until a particular woman arrived. I don’t know her name but I refer to her as Sister Mary Boombox.

Kudos to her for having her routine and knowing what she’s doing. She shows up with her pool equipment including flotation devices, water weights, and more. She spreads these out across the edge of the pool for easy access.

Then she sets up her music. Music that I can only describe as the Pandora Airplane Music station.

Personally, I prefer the quiet because I use the time to think and clear my head. Often, that’s where these posts are “written.” Still while the music is a distraction, it could be worse.

I’ve come to understand that this is her time. She has her routine. She has a plan. And, like I said, kudos to her for being consistent.

I was already in the pool when she arrived. She glanced at the lap pool and said to me “Looks like they took your spot.”

Roughly translated, I think that meant “what are you doing in my pool?”

But I don’t think I am. Because she needed a place to exercise.

And to have breakfast.

At one entrance to the pool she had her breakfast shake. At the other she had her water bottle.

She consumed both while exercising.

And while in the pool.

I’m not sure that my Fitbit tracks the calories I burn with an eye roll.

I’m not sure why I’m telling you this.

Maybe because my pattern has been to go to the gym and come home and write these posts. In spite of the mounds of source material I talked about last week, I often don’t have theme for the day. I try to get that much together the night before. But last night I was catching up on Doctor Who.

So maybe there’s more to this post than me grousing about someone at the pool.

I wish the pool was.