The independence of all political and other bother is a happiness.

We’ve all said it lately, haven’t we? We’re tired of politics.

I think we’re mostly tired of this election.

Face it, if you’ve spent any time in conservative or Republican politics, this election started in January of 2009 with the inauguration of the current President.

I’m not debating that. You know I’m not a fan.

And here we are in 2016 with the only clear majority being that of those who want neither major party candidate to go to the White House.

Enough of that. Well, sort of.

If, like me, you’ve been politically active most of your life, it’s hard to step away. Almost three years ago I wrote a post about stepping out of being actively involved in the electoral process. 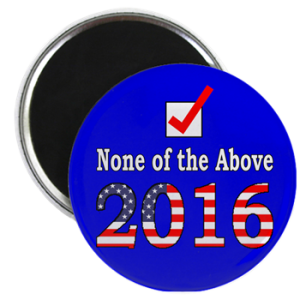 Visit The Write Side Shop

The break has not been easy.

No, I’ve not fully fallen off of the wagon, and I don’t need to call my sponsor.

But it’s hard not to care.

If you have principles and beliefs it’s hard to just stand on the sideline and not do anything about it.

I am most distraught over the fact that there’s not really anyone out there who can articulate, and represent, my principles and beliefs.

In all honesty, I got tired of being associated with a particular party that not only forgot their own creed, but was frequently embarrassing.

No, I’m not going off on that tangent. And don’t even think about putting me in a particular box, because I don’t fit.

It would be nice not to be bothered about politics. But we just can’t go there.

We don’t have to be making phone calls, or sending bazillions of emails, or stuffing envelopes. We don’t have to put the bumper stickers on our cars or the signs in our yards.

But, as nauseating as it might be we can’t, or shouldn’t, just not be involved.

Don’t turn away. Show up at the polls.

People not showing up is sort of how we got here in the first place.

Look, the world will not end with this election. Sure, regardless of who wins the country will look a little different.

It makes me sad that many of my fellow believers in Christ have placed so much importance on this election, even to the point of saying that a certain candidate is God’s choice for America.

I’m old enough to remember how evangelicals felt about the election of Jimmy Carter.

My memory isn’t what it used to be, but I’m pretty sure the world didn’t end.

If you’ve followed me here you probably know where I’m heading with my vote in November. I’ll be posting about that soon because I can never completely let this go.

I hope that doesn’t bother you.