And snow it begins… 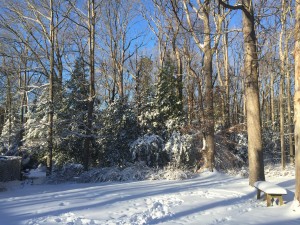 We’re likely all still snowed in on the East Coast.  As I write this I don’t yet know if the governor will issue a stay of execution for state employees.  Certainly his statement yesterday imploring people to stay off the roads on Sunday and Monday was cause for hope.  At the same time, I really do have things to do.

The storm stopped sometime over Saturday night and we woke up Sunday to beautifully clear blue skies and a bright sun shining down on everything under nearly two feet (I didn’t measure, it’s a guess) of snow.

It’s funny the effect that staying in the house for three days with three other people, two large dogs and a very annoying cat who wants to go outside, but really doesn’t.  We spent most of the last two days taking some turns shoveling out paths for the dogs to go out.  When you have two 70-ish lb. dogs and the snow comes up to their chest you know it’s been a major storm.

True to form, I had a huge list of things to get done over the weekend.  And some of them were indeed accomplished.

Truer to form, many things were not accomplished.  And that’s okay.

Not to rehash the whole working over Christmas holiday story, but I needed some downtime, okay?

But now, we’ve had our winter storm.  I’m ready for spring.

Truth is, I was ready for spring before the storm.

I’m not naïve enough to think that we won’t get more winter.  Hopefully, we’ve endured the worst.

It has shown me, however, that I need some variation to my desire to work solely in my home office.  With my backside planted firmly in a not so comfortable office chair for the past few days whilst I worked, binge-watched Broadchurch, read, and played games my back has screamed that it needs more movement.

It has not screamed for the shoveling of snow which, unfortunately, was the movement of which it got the most.

All that is to say that this whole freelance/working on your own thing also takes discipline.

Sure, if my only paycheck depended on my cranking the writing out the door I’d be a little more motivated.  But, the reality is that, without that motivation, I will also never get to that point.

I did a substantial amount of business writing this weekend. And, I completed another edit of the novel.

But I also did a substantial amount of nothing.

All work and no play makes Jack a dull boy.

I don’t know who Jack is, but I know if they bring 24 back with a different Jack Bauer I’m not watching.

Even if it is on another snowed in weekend.