For the beauty of the earth 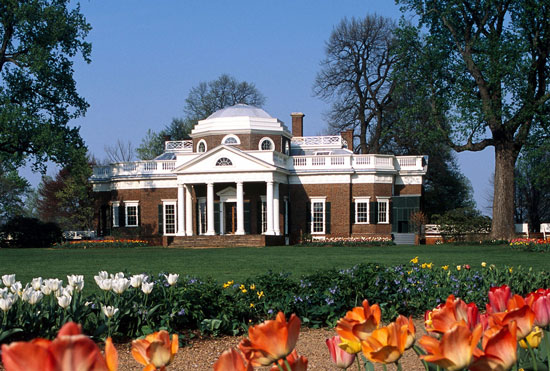 “On the whole I find nothing any where else in point of climate which Virginia need envy to any part of the world . . . . Spring and autumn, which make a paradise of our country, are rigorous winter with them [New Englanders] . . . . When we consider how much climate contributes to the happiness of our condition, by the fine sensations it excites, and the productions it is the parents of, we have reason to value highly the accident of birth in such an one as that of Virginia.”

Written on May 31, 1791 to Martha Jefferson Randolph by Thomas Jefferson.

Jefferson, our 3rd President, and principal author of the Declaration of Independence was born on this day in 1743. Died July 4, 1826.

Mr. Jefferson had a good bit of wisdom and he’s certainly right about the climate in Virginia.

Well, most of the time.  You’ve heard me complain about winter.  I’ll likely do it again.

But I love springtime in Virginia.

I wrote something about springtime in Virginia into a speech for a high ranking government official several (many several) years ago.  I wish I remembered what it was.

It was a good line.

Things are fresh and new, and it’s time to get moving again.

We all whine about going back to work on Mondays.  But it’s a new day.  A fresh slate.

Sure, we may have stacks of crap to deal with from last week.  But we can turn to a new page in the legal pad (or electronic device of your choice) and start a new list.

I’m kicking myself in the behind to get back on the nutrition and exercise routines.

And, as I wrote last week, I’m taking my shoulder and neck woes in a new direction of treatment.