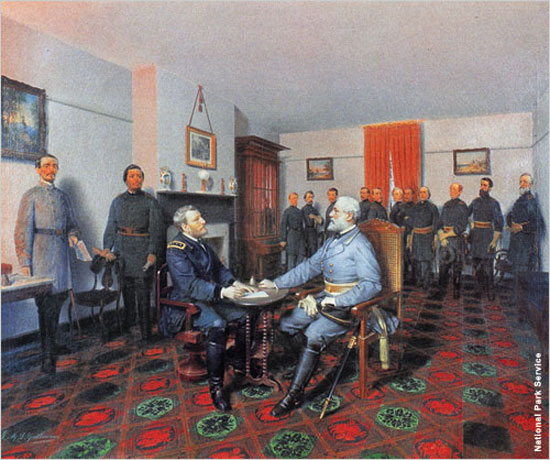 On this date in 1865, Robert E. Lee surrendered the Army of Northern Virginia to General Ulysses S. Grant at Appomattox Courthouse.

Ironically today, Northern Virginia is the least southern part of the Commonwealth.

On April 8 Grant said “It looks as if Lee still means to fight.”  Perhaps he did. But after the disastrous battle at Sailor’s Creek and the fall of Richmond it was becoming more and more clear that the quest to preserve the Confederacy was a lost cause.

Lee knew when it was time to surrender.  That effectively ended the war, but not the fighting.  And, Abraham Lincoln was assassinated.

Various factions of the South continued to fight for long after that.  Some factions still don’t think the war is over.

No, I’m really not making that up.

Which, far too often, it is not.

I’m surrendering a bit of my own today.

After nine months, at least five doctors, four in the same practice, multiple sessions of physical therapy, and far exceeding my out of pocket limit on my insurance, I’m giving up on traditional western medicine.  We don’t need to talk again about the nasty side effects of the narcotics that were supposed to help with the pain but never really did.

The message I got yesterday was that if this is not healing on it’s own, we’d be looking at surgery.

No, we won’t.  Because I’ve already decided that, regardless of what this doctor told me, surgery was off the table.  So to speak.

By the time you read this, I will have called to cancel my follow up appointments.

Maybe I’m making a mistake.  But nine months later, there’s still no clear diagnosis other than the fact that there’s a nerve issue in my neck.

I plan to follow up with my chiropractor, and work out my own exercise and therapy routine.

I may pursue some non-traditional routes as well.  I’m not ready to talk about what I’m considering and certainly not ready to defend that part of the decision yet, so I’ll just wait on that.

Am I making the right choice?  I don’t know.  I think so.

Will I regret this decision?  I don’t know.  I don’t think so.

Sometimes you just have to realize you’re fighting a losing battle.

I’ve used almost half of my annual allotment of sick leave going to doctor’s appointments and therapy.

I’ve spent more in gas and tolls in the last nine months than the last two years.

I think all of the medical professionals I’ve met with and worked with mean well.  I think they really do want to see me better.

I just don’t think they’re getting me there.

Is there a possibility that six months or a year down the road I’ll realize I’ve made a horrible mistake and have to go back, embarrass myself and beg them to take me back?

I think this is the right move.

If it’s not, you know you’ll hear about it.

Hopefully we won’t refer to it as “The Lost Cause.”