On not writing it down… 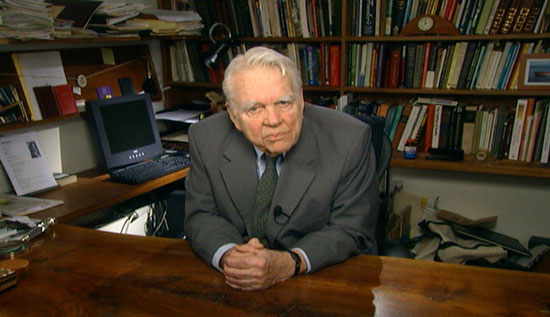 It was 1996 at the Republican National Convention in San Diego.  No I was not, nor have I ever been, a delegate to a national nominating convention.

My wife and I were working for a photographer friend of ours.  We were working as trackers and organizers with a team of photographers to do event photography for the week.  We traveled all over the San Diego area.

I was on the convention floor the day Elizabeth Dole gave her speech.  Say what you will about Republicans and Bob and Elizabeth Dole, but that speech was mesmerizing.

But where was I?  Oh yes, running into Andy Rooney.

It was early on in the week and we were meeting at our hotel headquarters. One of the photographers was already covering an event at another hotel.  He called needling additional equipment.

I, of course, was dispatched.  I forget what the equipment was.  It might have been a flash, or a tripod or extra film. That doesn’t really matter.

I dashed out of the hotel.  Navigated the streets of San Diego as best I could and pulled into the parking lot at the Marriott.

I ran inside, turned a corner and literally almost flattened Andy Rooney.

Fortunately, I stopped just in time and had the presence of mind to say “excuse me, sir.”

He didn’t say anything, but I suspect if he did it would have been along the lines of “dumbass Republican operatives.”

Which, of course, I was not.  You pick the descriptor that does not apply.  That’s not the point here.

But in reality, he never said that.  Or at least didn’t say it consistently.

Instead that was part of Joe Piscopo’s Saturday Night Live routine when he imitated Rooney.  But somehow that phrase became associated with Rooney.

That’s certainly not the first or last time a phrase has been miss-attributed.

Just ask anybody (of a certain age) who said “I can see Alaska from my house.”

I can almost promise you that more than 90% of respondents would say “Of course, that’s Sarah Palin.”

No, actually, it was Tina Fey pretending to be Sarah Palin, again on Saturday Night Live.

I’m not defending Palin, again that’s not the point.  But what she actually said in an interview was that (and this is a paraphrase) “parts of Russia can be seen from Alaska.” That’s a completely true statement that was taken out of context to make fun of her.

Andy Rooney once said “People will generally accept facts as truth only if the facts agree with what they already believe.”

That’s very true. Many people believe Sarah Palin to be an idiot.  Thus they believe the Alaska from my porch story.

I think it’s just that we all need to be a little more careful about the stuff we share.

Don’t get so caught up in the “truth” of what you see on Facebook, or elsewhere on the Internet. I’ve talked about this before.

And before you flatten Andy Rooney.