You can be Amazing

No RGIII was not being persecuted 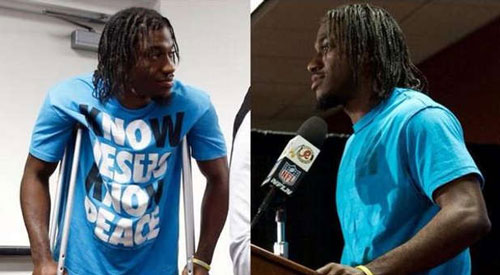 A story was circulating on Facebook (and elsewhere) earlier this week about how yet-again-injured Washington Redskins quarterback Robert Griffin III was forced to turn inside out a shirt that read:

Griffin came into the room for the press conference wearing the shirt. But before speaking he turned the shirt inside out so that the message could not be seen.

If we’re to believe Facebook comments, RGIII was being persecuted and forced to hide his faith.

RGIII is “not a real Christian” because he was embarrassed to proclaim his love for Jesus.

According to J.P. Finlay at CNS Washington what happened with the shirt really isn’t clear.

What we know is that NFL bylaws state that players are not allowed to wear clothing that make personal statements on game days. The first reports out indicate that this was why Griffin was told to turn the shirt around.

The other reason given was that the shirt being worn by Griffin was not a Nike product.

The NFL has a corporate deal with Nike, and in the past Griffin has been fined for wearing Adidas gear on game days.

Regardless of the reason for the shirt being turned around, Griffin was not being persecuted for his faith, nor was he denying his faith.

There is no question that there is a growing hostility toward Christianity in this country. Believers who study Scripture will actually know that we are to expect this.

But, when followers of Christ in other countries are being forced to leave their homes, are being tortured, are being murdered, are we really going to get all worked up about a t-shirt?

Frankly folks, a lot of American “Christianity” deserves to be mocked.

There may come a time when Christians actually are persecuted in this country.

This is not that day.