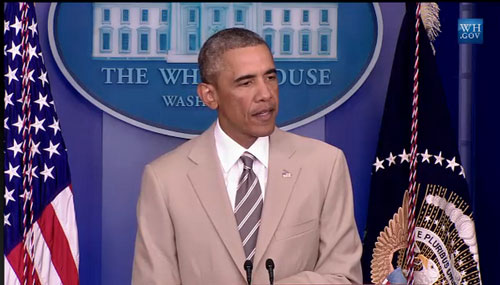 Yesterday, President Obama addressed the media regarding Ukraine and the Islamic State. As it usually happens when he speaks, social media went nuts.

No, seriously, I’m not making this up.

Granted, some of the comments were brilliantly funny. Some thought the suit sent the wrong message to the terrorists.

You really think the American sense of style concerns people who get their jollies by beheading journalists and blowing up children?

Everybody: Out of the Internet pool.

You know I am no fan of the President. But attacking his suit is just stupidity.

It’s not like he was wearing it after Labor Day.

The thing is, all that obsession over what he was wearing overshadows what he was saying, or not saying. You can, and should, read the news reports.

Personally the fact that he said “We don’t have a strategy yet.” regarding IS in Syria concerns me a little, actually a lot, more than what he was wearing. I’m just not sure I would have announced that to the world.

That’s another story and another post that I’m not going to write.

Of course it’s true that we’ve made fun of our politicians for years. Late night hosts and comedians have always poked fun at the occupant of the Oval Office.

But social media has escalated that. We’re all in competition to see who can get the funniest, and most biting zinger.

He who gets re-tweeted last, wins.

We need to stop.

So, I won’t presume to tell you what to do. And I know my little post won’t stop the next feeding frenzy.

But maybe it will make us think before we post or before we jump in and start sharing the hysteria.

If it helps, I don’t even own a tan suit.