We have lost our minds: Washington Redskins edition

Moira Allen: The Freedom of the Fourth 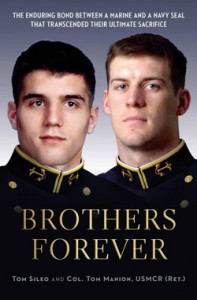 Greater love hath no man than this, that a man lay down his life for his friends.
~ John 15:13

In Brothers Forever, award-winning journalist Tom Sileo and retired Marine Colonel Tom Manion tell the story of Manion’s son Travis and his roommate and best friend Brendan Looney. Both gave the ultimate sacrifice for their country.

While the book is not written as a work of faith, deep faith and commitment plays a part of this story.

The book tells how the two met and became fast friends at the Naval Academy. When they watched the towers fall on 9/11, they knew and understood the seriousness of their task.

I will admit that I had a hard time getting through the first portion of the book. It seemed a little slow. But, as I knew what was coming and Manion was deployed the intensity grew. Even though I knew it was coming, when Travis died, I felt the loss. I sensed the grief of his family.

This may not be the best written book about the War on Terror and the sacrifices made, but I believe it is one of the most important. While politicians and pundits argue about whether we should have gone to Afghanistan and Iraq, Travis Manion and Brendan Looney accepted the call to defend their country.

They rest beside each other now at Arlington Cemetery. Their story is worth your time.

This review is also posted at Amazon, Goodreads and Richmond Bible Examiner.