365 Things I Believe: Jars of Clay

Hats Off, or On to Justice Scalia 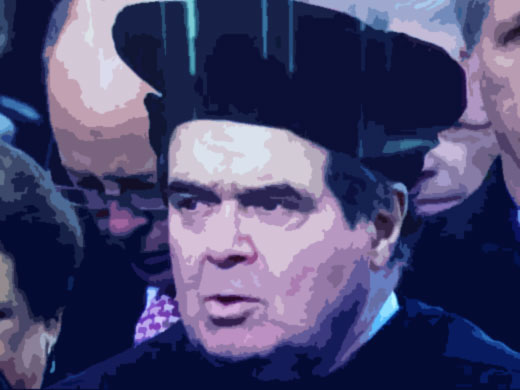 Those following the second Inauguration of Barack Obama via Twitter or perhaps on television where treated to an image of Supreme Court Justice Antonin Scalia wearing what was described as “a weird hat.”

As Kevin Walsh of the St. Thomas More Society of Richmond explains, “the hat was a custom-made replica of the hat depicted in Holbein’s famous portrait of St. Thomas More.” Walsh says the group gave the hat to Scalia when he participated in a November 2010 dinner.

Who was St. Thomas More?

Sir Thomas More, known to Catholics as Saint Thomas More was an English lawyer and an important advisor to King Henry VIII of England. He was Lord Chancellor from October 1529 to May 1532.

supremacy of the Pope. More spent most of the rest of his life writing in defense of the Catholic Church. After refusing to render allegiance to the King as the Head of the Church of England, he was confined to the Tower in 1534 along with his friend St. John Fisher. Fifteen months later, St. John was executed. Nine days following that, More was tried and convicted of treason.

More told the court that he could not violate his conscience. On the scaffold he told the crowd of spectators that he was dying as “the King’s good servant, but God’s first.”

More was canonized by Pope Pius XI in 1935 as one of the early martyrs from the rift between the English Church and Catholicism. In 2000, Pope John Paul II declared more to be the Patron of Catholic Statesmen and Politicians.

The life of St. Thomas More is depicted in the Robert Bolt play A Man for All Seasons. The play was made into a feature film in 1966. Paul Scofield played the lead for which he won the Academy Award for Best Actor. The film also won Academy Awards for Best Adapted Screenplay, cinematography, costume design, Best Director, and Best Picture.

The question remains as to whether Scalia thought he was just wearing a “cool hat” or if his head gear was a statement with regards to the Obama Administration’s antagonistic attitude against people of faith.

A recent study by the Barna Group says “Slightly more than half of adults say they are very (29 percent) or somewhat (22 percent) concerned that religious freedom in the U.S. will become more restricted in the next five years.” [via The Christian Post]