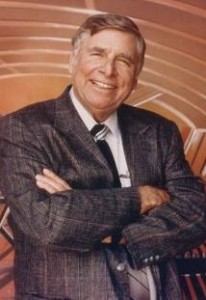 Television screenwriter and producer Gene Roddenberry is, of course, best known for bringing us Star Trek. Star Trek premiered in 1966 and ran for three sesons. But the Star Trek universe conitnues today after 725 television episodes of multiple “Generations.” The twelfth feature film is due out in May 2013.

During World War II, Roddenberry flew 89 combat missions in the United States Army. After the war he worked as a commerical pilot. He later joined the Los Angeles Police Department, following in his father’s footsteps. From there he began to focus his time on writing scripts for television.

Roddenberry was married twice. First to Eileen Rexroat. They divorced after Roddenberry had affairs with Star Trek’s Nichelle Nichols and Majel Barrett. He divorced his first wife and married Majel Barrett in 1969. They remained married until his death.

The rest, as they say, is history. Or the future.