365 Things I Believe: The Small Stuff 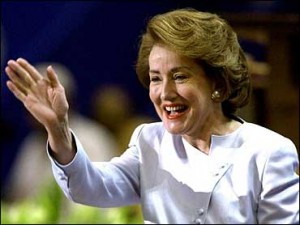 When her husband was running for President in 1996, she spoke one afternoon at the GOP convention in San Diego. She left the platform and walked out into the audience to deliver her remarks. I happened to be working with a photographer for the event and was in the convention hall at the time. The audience, myself among them, was mesmerized.

She served as President of the American Red Cross from 1991 until 1999. She accepted no salary in that position.

In a single lifetime, I have seen Americans split the atom, abolish Jim Crow, eliminate the scourge of polio, win the Cold War, plant our flag on the surface of the moon, map the human genetic code, & belatedly recognize the talents of women, minorities, the disabled once relegated to the shadows. If we reaffirm these timeless and unchangeable truths, if we choose life and liberty, compassion and service, character and faith, we will honor those who came before us, and inspire the children of tomorrow. ~ Elizabeth Dole, 8/31/2004