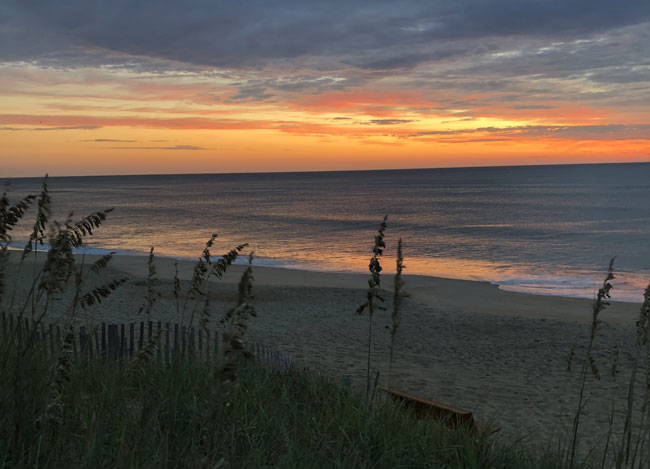 Then Peter answered and said to Jesus, “Lord, it is good for us to be here; if You wish, let us make here three tabernacles: one for You, one for Moses, and one for Elijah.”

We returned home Saturday from the beach. I think I might have mentioned that we were spending last week at the beach.

For various reasons that don’t need to be reviewed here, this was the first time we’d had our beach week in several years. We found a different house this time that was not only closer to the ocean, we could even see the ocean between the houses across the street, it also had some additional accommodations appropriate for, let’s say, people of advancing years.

Because we were so close, and because those advancing years sometimes make it difficult for me to sleep in, I made it to the beach every morning for the sunrise. Seven days. Seven mornings. All spectacular. 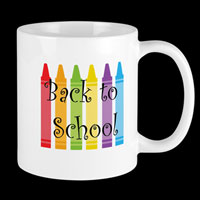 One morning, after staying up late the night before talking to a good friend, I decided that I wouldn’t go to the beach for sunrise. I would just watch it from the deck. But, around 6:00 a.m. I saw the first glimpses of red along the horizon. I knew I had to be on the beach. And I was right. The photo at the top of this page is from that morning. My iPhone does not do it justice.

For many years, if you had asked me what my ideal work and life situation would be, I would tell you that I would be writing from an undisclosed beach location wearing a sweater with patches on the sleeve.

Narrator: The sweater was optional.

I’d still tell you that, but I had some time to think about that last week.

As spectacular as everything was (and is), I would not want it to become routine.

I talked to several people who were on the beach each morning to walk their dogs. I don’t think they found it routine, but I wondered if their appreciation was the same as mine.

I mean, I’d waited four years to park my backside on that beach. They had waited 24 hours.

I found myself thinking I would not want to live there if I ever took it for granted.

For the first eight years of our marriage, the wife and I lived and worked in the Washington, DC area. Forget everything you “know” about what a cesspool DC can be and is, it’s still a majestic city.

There’s nothing quite like driving across the Potomac every morning viewing the monuments along the skyline, which you had plenty of time to do if you had to cross the 14th Street Bridge. Or walking past (or through in a pre 9/11 world) the U.S. Capitol Building. Add to that free access to the Smithsonian, summer concerts, fireworks and more. It was somewhat magical.

I don’t know that we ever lost the wonder, but it did become routine.

For many years we talked about what it would be like to move back. A visit and a drive through traffic usually ended those conversations.

I feel somewhat the same about the New River Valley where I grew up at the foot of a mountain. The mountain was just always there. The beauty of the river, the mountains, and the forests was always just there. But it was not until I was older and had moved away that I began to understand how absolutely rich we were to be surrounded by so much natural splendor.

While I’ll always have a love for the mountains, all my life I’ve felt drawn to the ocean. Near the ocean I can be at peace with myself and the world. My Aunt used to tell me that I was drawn to the water because I was born under the sign of Cancer, which is a water sign.

I don’t actually follow astrology, but I have to admit that makes some sense.

In a different life in a different world I might have taken that left turn in Albuqueque and ended up living and writing from that coastal location.

Instead, I’m looking out at the backyard which received no loving care from the offspring whilst I was away. It did, however, receive an ample supply of fertilizer from two overgrown dogs.

Maybe someday I’ll reach that point in my career that allows us to relocate to the beach permanently.

Until that time, I will cherish the memories and the photos from the times I am able to be there, and I will look forward to the next time.

It’s the last day of August. I’m still teleworking, but after 47 years of house arrest, my wife is returning to school today to prepare to teach virtually for an undisclosed amount of time.

It’s still warm outside, but I can already sense the change in the weather.

In spite of the work that needs to be done in the backyard, I hope that I will never grow tired of watching the changing seasons out of my office window.

If nothing else, I’ll get to wear that sweater.