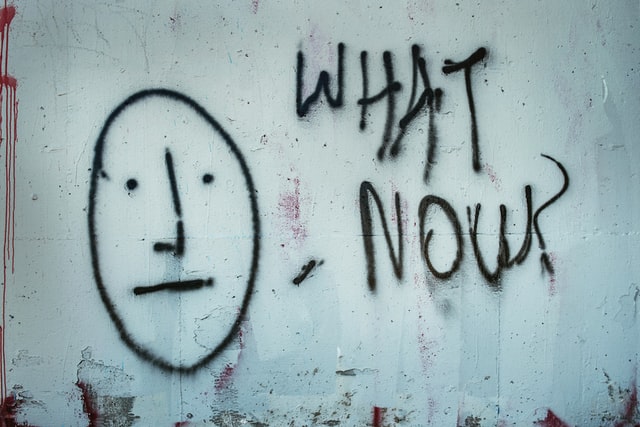 In spite of my post, yesterday I’ve reached that point. I’ve had enough.

After 47 years in solitary confinement, the news of the past week has sent me over the edge.

I forget where anger fits in the stages of grief (and I’m really too agitated to look it up), but that’s where I’ve found myself.

I spent the bulk of yesterday trying to sort out a meeting for work. We had it all planned to socially distance and operate from our downtown offices. But our offices were closed on Monday and Tuesday due to the unrest in Downtown Richmond. As I write this, I don’t know Wednesday’s status. We opted to move.

I alternated that with trying to craft a statement for our theater. Getting the right words was not as easy as I had hoped.

In the midst of all of this social media was arguing all day long about how the President “authorized” the use of tear gas to clear the area for a photo opportunity in front of St. John’s Church. As if he was actually consulted about how the area would be cleared.

The problem is that the National Park Service said there was no tear gas used and the area was being cleared because of curfew.

Like you, I’m skeptical enough to call shenanigans on some of that. It was an ill-conceived photo op, to be sure.

But to be lectured by Episcopal Church leadership about using the church for political purposes?

Google Henry VIII, it will do you good.

Still, a more competent advance person (yours truly, perhaps?) would have advised the President to open the Bible to a conveniently pre-marked passage and actually read from it.

Please though, let’s not tie up my phone lines with job offers. I’ve done political advance. I’d only consider going back to it if your offer started somewhere in the high six figures.

And maybe included a pony.

I found myself by mid-day being just agitated, and angry.

I’m still a little on edge, but I felt better after a shower and some Vanilla Oreos, which I think may be modeled after lembas in Lord of the Rings.

I established earlier this week that I am horrified by what happened to George Floyd, and others, but at the same time I see the futility in the looting and rioting.

FWIW, Floyd’s family has stated that the rioting and looting does not honor his memory.

The voice of his family is being drowned out.

On a side note, while you’ve got a Google tab open, Google David Dorn from St. Louis and talk to me about justice.  Then look for David Underwood.

Yesterday’s social media Black Out Tuesday may have helped with solidarity, but little more.

For me, trying to sort out what was appropriate to post just added to my agitation.

But this is not about how this affects me.

I mean, it is because I’m writing it and this is my blog.

It’s about me because I’m still trying to figure out how I respond.

I don’t know that I have an answer to that.

Heck, I’m having a hard enough time writing this post.

Sure, I can try to do all the “right” things on social media, like all the right tweets, etc.

It’s way too easy to change your profile pic to a black box. But, seriously what good will that do? In fact, some said it might even hinder the message by clogging up the Interwebz.

Sometimes, I could use a manual.

I sit here sequestered in my home office in white suburbia and ask so what, then, am I to do?
Yes, I read my post yesterday about prayer. That’s vital. That’s something we all can do.

But sometimes you need to put some feet on those prayers.

Is anything that I do going to make a difference?

Mother Teresa said “We ourselves feel that what we are doing is just a drop in the ocean. But the ocean would be less because of that missing drop.”

Yes, I know about the Butterfly Effect. But I can’t even manage to grow a decent butterfly bush.

It comes down to this. I don’t know what I can do.

I don’t know what I can do to make anything better.

I realize you may come here for the brilliant writing that solves the world’s problems.

But, today, I don’t have an answer.

I hope you kept your receipt.

Photo by Tim Mossholder on Unsplash