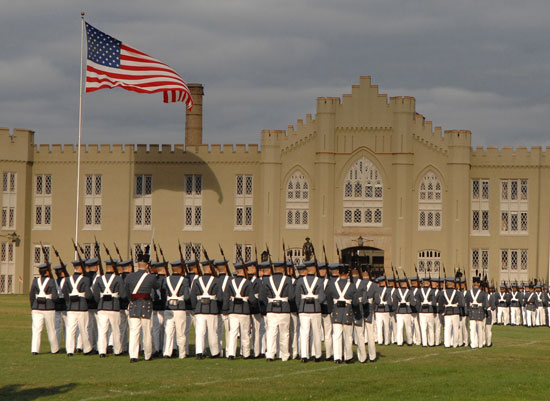 The Virginia Military Institute in Lexington, Virginia was founded on this day in 1839.

Today is Veteran’s Day, and we honor all those who have served.

Some days, I struggle with the right words, what to say. Especially on days of significance. Sometimes I find that I’ve said it better in the past. So, today, I repeat a portion of my Veteran’s Day Post from 2013:

I never served in the military. Graduating high school just three years after the end of the Vietnam War (you do the math), my generation didn’t feel the same urgency of the call to serve our country. Many of my classmates did serve, and post college I toyed with the idea, but never followed through. While I try not to live with regrets, I know that having served would have made me a better man.

But today I honor the memory of my father, Marvin V. Fletcher, Jr. He served in the U.S. Army in Germany and Korea, joining just after the end of World War II. While in Germany he also played with the Army band in the movie The Big Lift starring Montgomery Clift. My father died far too young at the age of 49. I still miss him.

His brother, James, also served in the Army and made it his life career. We lost Uncle James in 1983. James is a family name that somehow skipped my generation, my son now carries the name in honor of those who went before.

My mother’s father, Reese Melvin Russell, served in World War I where he was exposed to nerve gas. I never knew him. He died before my mother graduated from high school. His journal, compiled and edited by his oldest daughter Frances, now resides as part of the Veteran’s History Project at the Library of Congress.

Virginia Tech Basketball Coach, Buzz Williams, put together this moving video to remind his players why the National Anthem is sung before each game. I don’t think I could say it better.

Thank you to all who have served and are serving.

Wars may be fought with weapons, but they are won by men. It is the spirit of men who follow and of the man who leads that gains the victory.
– American General George S. Patton was born on this day in 1885. (died 1945)