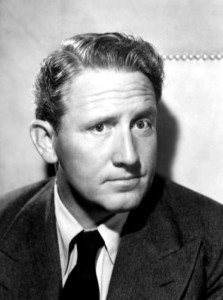 American actor Spencer Bonaventure Tracy was born on this day in 1900. He was won of the major stars of the Golden Age of Hollywood. His career spanned 37 years.

“I’ve never known what acting is. Who can honestly say what it is? … I wonder what actors are supposed to be, if not themselves … I’ve finally narrowed it down to where, when I begin a part, I say to myself, this is Spencer Tracy as a judge, or this is Spencer Tracy as a priest or as a lawyer, and let it go at that. Look, the only thing an actor has to offer a director and finally an audience is his instinct. That’s all.”
—Spencer Tracy, giving his opinion on acting.

Touring with his college debate team, Tracy auditioned for and received a scholarship for the American Academy of Dramatic Arts in New York. He graduated from AADA in 1923 and later that year landed a part in a Broadway comedy starring Ethel Barrymore.

Tracy’s film debut was with Humphrey Bogard in Up the River (1930). He immediately was offered a long-term contract with Fox Film Corporation where he made 25 films. In the 1930s he moved to Metro-Goldwyn Mayer. Producer Iving G. Thalberg told journalist Louella Parsons that “Spencer Tracy will become on of MGM’s most valuable stars.”

Spencer Tracy was nominated for nine Academy Awards for Best Actor. He holds this record with Laurence Olivier. Tracy won for Captains Courageous in 1937 and for Boys Town in 1938. He was the first person to receive consecutive Best Actor awards a feat not repeated again until Tom Hanks won in 1993 and 1994.

In 1923 Tracy married actress Louise Treadwell. They had two children, a son John and daughter “Susie.” Tracy had several extramarital affairs and left the family in 1933 but never divorced Treadwell. In 1941 while working on Woman of the Year, Tracy began a relationship with Katharine Hepburn that would last until his death 26 years later. The relationship was one of Hollywood’s open secrets. Angela Lansbury said “We all knew, but nobody ever said anything. It those days it wasn’t discussed.”

Tracy had a history of heavy drinking, pills and being overweight. After being treated for heart disease and diabetes in 1965 he spent most of the next two years quietly at home with Hepburn. He died of a heart attack on June 10, 1967. He was 67